After a week in Ireland, the road was calling again. Up at 3:45am, Tina and I rounded up our sleepy troops and we all kissed Mum goodbye, not knowing how many years it’d be till we see her again. We shoved the boys and the suitcases into the taxi as it idled in the cold, its piercing lights the dread sign that it was time to leave Ireland after less than a week. As we drove through Blackrock, the Docklands, Summerhill and Drumcondra to the airport for our short flight to Hamburg I talked nonsense to the driver about the US-China trade war, about which each of us knew less than the other. 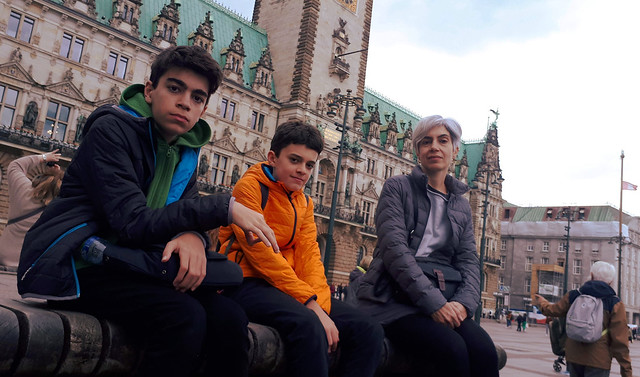 We’d only allowed ourselves a couple of hours in Hamburg, just enough for a walk to the Rathaus (such a beautiful word), each of us eating a Stück of Laugenbrezel, a type of thick, salted pretzel we got at the train station, before having a quick lunch in a Europa Passage foodcourt, and ending up with a stroll along the south bank of the Binnenalster, the lower part of a large, lake-like body of water fed by the Elbe. It was nice to be able to get into the city for a quick look around. I was over the sadness I’d felt this morning leaving Mum’s by then. But we couldn’t dally too long; we had a train to catch.

On our big trip back to Europe four years earlier we stayed with a few families, both as Couchsurfers and as Help Exchange guests. It was always part of our plan to try to include the friends we made on that trip in any future trips we made back to the old continent. So as part of this trip we’d arranged to meet a Polish family we’d stayed with and got on famously with four years ago. The camping trip around the lake district of Pomerania they took us on was probably the highlight of that whole European journey. And now, this year, they’d arranged to drive up from their hometown of Kołobrzeg, on the Baltic coast, to rendezvous with us just south of the Danish border. We were all going to Lego House. 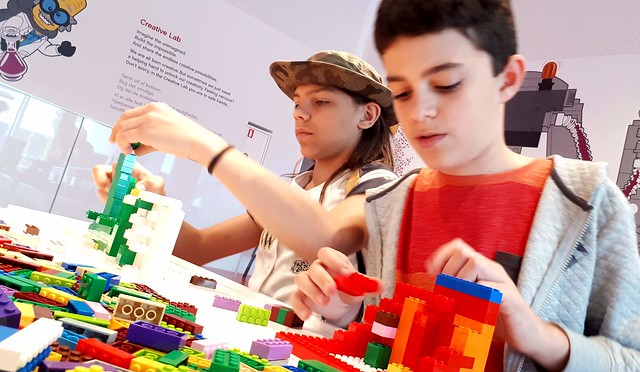 Janek and Eoin at Lego House

Outside Tarp railway station there was no sign of them at the arranged time. There were signs of rain, though. Lacking a local sim card (we’re trying to do this trip as austerely as we can) or a wifi network, we connected briefly, via our Australian mobile carrier, to Skype to find out that they were running late. Nothing for it but to lug our stuff to the three-star Landgasthof Tarp, the village’s main hotel, and nurse a pint of Flensburger (me), Schleswig-Holstein’s local pilsener, and a Weißwein (Tina), while the kids read their books. Well, we hadn’t come to Germany, or Ireland, for that matter, for the weather.

Reunited with our Polish friends, we were reminded almost immediately that they liked to travel in austerity too. And Polish austerity beats Australian. We’ve stayed in some fairly basic Airbnbs in our day, but thus far we’ve never spent the night in a sports centre. Rødding Centret was clean and spacious and had aspirational quotes (in English) from the likes of Muhammed Ali and Roger Federer all over the walls. There were teams of kids staying the night too, doing sports or something, but they seemed to go to bed early and get out early. 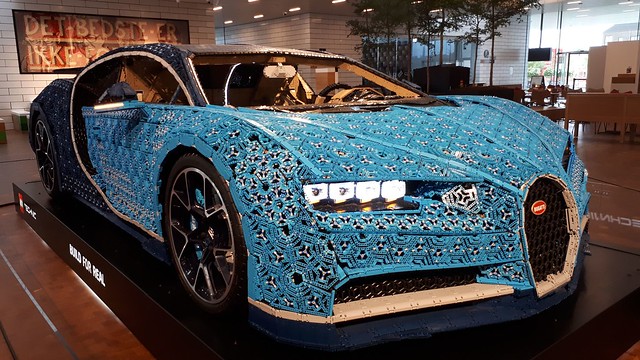 As a traveling family, we obviously want to involve Alexander and Eoin in our decisions about what we should go and see. It won’t do to keep dragging teenage kids to churches and galleries when they’ve learnt there are things such as Lego House in the world. So it was only natural to combine a visit to Scandinavia, which we’d long wanted to do, with a stop in at Billund, the hometown of Lego, to see the newly-built Lego House. Especially, when the lifesize Bugatti Chiron is in town.

Lego House was every bit as good as we’d hoped. In terms of hours, we put in a (flexi-)day’s work there, arriving at around 9:45 and staying till after 6. There were entire, blissful hours where neither Tina or I had a clue where either of our kids, or any of our four Polish friends were; neither did we give a hoot, busy as we were building things with bricks. 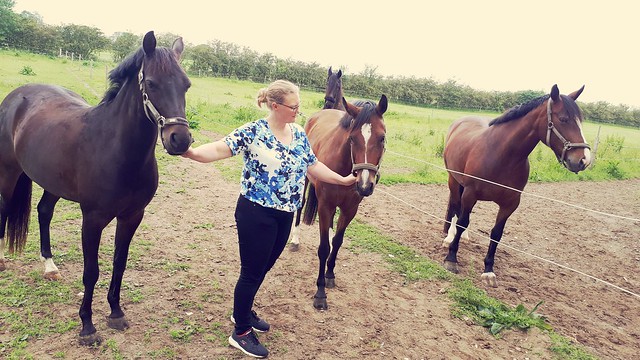 Ann with her horses, Jordrup, Denmark

Our next two nights saw us fall back on our old couchsurfing ways, with two separate stays. With such a short amount of time in Denmark, it seemed a real shame to only meet Polish people, much as we loved hanging out with our friends. We were hosted firstly, more or less in the middle of nowhere, by Ann and her family, who put us up in a converted stable building built in 1903, seemingly. They had four horses and a dog, who apparently was in the distressing habit of killing the tiny and rare jumping mice still found in parts of Denmark. Considering we were with real, actual Danish people, I thought I’d have what they were having for breakfast: solsikkurugbrød with baconpostej. Not bad now. Ann told us that sunflower seed bread slathered with odd, bacon-y, pâté-like substance was fairly typical breakfast fare. 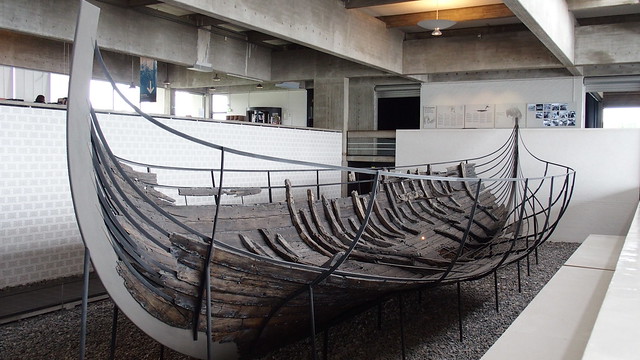 Our second hosts, who live outside the town of Roskilde, were quite different, but every bit as hospitable, maybe even more so. Their home had: four or five guitars hanging up on the wall; several stuffed animals, alongside the guitars; a string of Christmas lights, still up, made of spent shotgun shells; saucy murals drawn by Mads, the husband, in the style of the great cartoonist Robert Crumb, and four thousand other odd and wonderful things. After cooking us dinner they sat us all down and taught us the board game Dixit. We love learning games on the road. One of our cherished memories of Brussels is learning the game Carcassonne from our host. At one stage Ida handed around a femur-length bone and asked us all to guess what it was. No idea. Poor Alexander was the one holding it when she told us the alarming truth: it was a walrus’s penis bone. Well! The things you learn couchsurfing. The next morning I had more solsikkurugbrød, this time with curried herring.

In the Roskilde Viking Museum we got to see the second reconstructed vehicle we’d seen here in Denmark. It might not have been as impressive as the Bugatti but, on the other hand, if the Chiron had been dug out of the bottom of Roskilde fjord sixty years ago after laying there for a thousand years it probably wouldn’t be looking so shmick.

Despite the fact that most EU members switched to euros on the first of January, 2002, following a referendum two years earlier, Denmark hung on to its krone. It was a sign of the times, however, that we managed to go without having to change any euros into krone for the three days we were in Denmark. It amazed me how nowadays you can pay for everything except public toilets using a card. Seasoned travelers that we are, we just hung on. We’ll want to get some roubles in Russia, though, since we’ll be there for two weeks. It can get a bit tedious paying for every single coffee with a card. But still – life is getting easier for the international traveler.

This was our first trip to Scandinavia. Strangely – at least I thought it was strange – Finland, our next destination, isn’t in Scandinavia. When we were planning this trip we toyed with the idea of crossing the bridge from Copenhagen to Malmo just to see Sweden, but we’ve outgrown that sort of ‘ticking things off the bucket list’ mentality. We’ll see Sweden, and Norway too, some other time. For now, it’s onward to Helsinki.

4 thoughts on “Into Scandinavia”