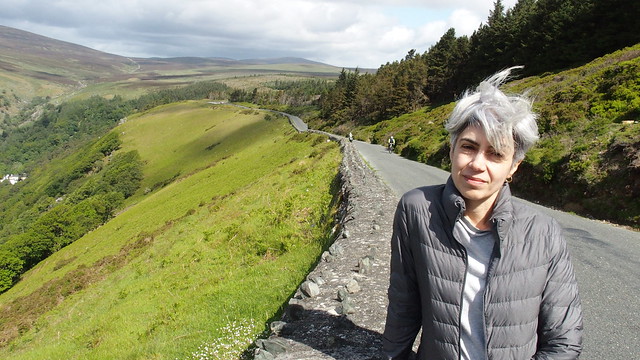 Tina at the Sally Gap

Flicking through an old Bank of Ireland calendar for ideas a few months prior to our trip, I got to May and saw a photograph of Lough Tay, called ‘the Guinness Lake’ in the calendar, at the Sally Gap in Wicklow, only to realise, with some surprise, I’d never been there, even though it was only a short distance from where I grew up. I decided that a trip down to the Sally Gap would be the one new thing we’d see on this brief homecoming. One half-good day was all we’d need. With only six days scheduled in Dublin, we were always going to be subject to the whims of an Irish June. In the event, we got both rain and sunshine.

The road south of Tallaght, a large town southwest of Dublin, quickly became narrow and winding, with a surrounding landscape that looked familiar to us from our years living near Roundstone Bog in Connemara. The light was changing from moment to moment, so we’d have to be quick with any photos we wanted to take. Cyclists came by one by one, then in pelotons, brave souls all. No sooner had we crossed the Sally Gap crossroads, heading back east across Wicklow county, than we stopped the car and climbed down the gorse-lined slope to the shelf overlooking Lough Tay, close to, if not right at, the spot where the picture in the calendar had been taken. 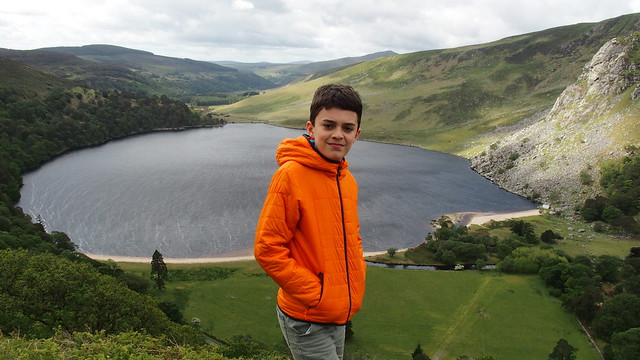 We took pictures of the black lake, streaked with wind lines, way down below us; of the hill’s cliff-face opposite us, cosily framing the lake; and of the valley disappearing away towards Glendalough. On this trip we still had parts of Denmark, Helsinki, and the two great cities of Russia to explore, but you have to see your own country first before you can see others.

The ‘Highest Pub in Ireland’, in the village of Roundwood, was closed for the public holiday, but the main hotel in Enniskerry served us (and a posse of visiting Chinese) ham sandwiches and chowder. There was a nice international buzz in the village and we got chatting to a couple of well-traveled Germans on a coach tour, pausing on their way to Glendalough, who were interested in the nearby German war graves. On an autumn Sunday afternoon three years earlier, on our big trip back to Europe, we’d brought the boys down to Glendalough. We took them everywhere on that trip. With such a short time at home this year, we were just glad to have been able to get out into the Wicklow countryside at all and see some sights we’d never seen before. The weather held long enough for us to walk a loop around the Glencullen river in Knocksink Woods before heading home to Mum’s. 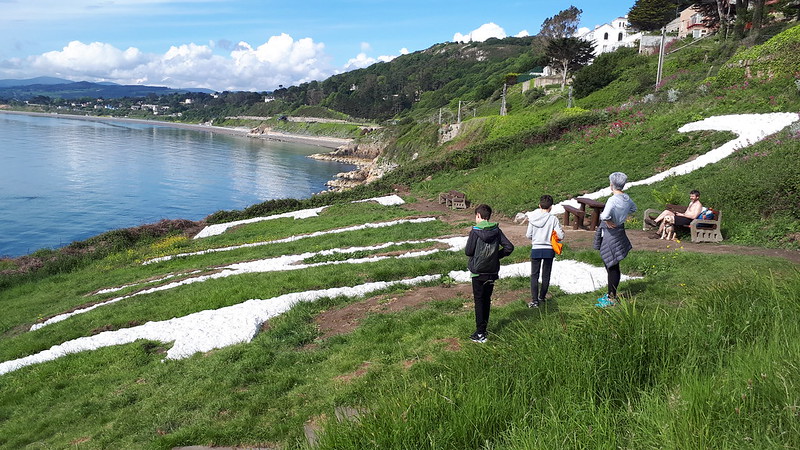 While we were home, the 75th anniversary commemorations of D-Day were being celebrated. Not much tends to change from one visit to the next in our part of the coast of south county Dublin, but this time one thing was new: World War II Lookout Post no. 7 had been unearthed on a promontory called Hawk Cliff on the Vico Road, near the famous swimming area. The sign, visible during the war, was there to ensure the German army, whether they saw it from sea or air, didn’t confuse Ireland with England. The area has recently been landscaped and the long-hidden ‘EIRE’ sign below the surface has been surfaced and radiantly whitewashed. According to the hardy Vico swimmers we chatted to on a breezy, sunny morning, it’s the seventh of thirty-four such lookouts around the country. 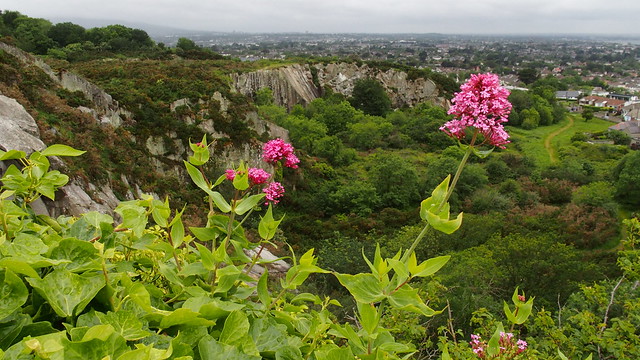 Valerian, vividly pink, grew high out of the embankments among the brambles we used to go picking raspberries from and the nettles we knew to avoid around Killiney Hill all during our week back in Ireland. Formerly known as Victoria Hill, Killiney Hill was opened as a public park in 1887 by ‘His Royal Highness Prince Albert, Victor of Wales’ and a bevy of worthies such as Rt Hon The Earl of Meath and Sir Edward Cecil Guinness, all under the Opens Spaces Acts to the Commissioners of the township of Killiney and Ballybrack, according to the plaque on the iconic obelisk. Over the course of the week, we spent time passing over and around the hill, on our way to and fro Dalkey, as we always do when we’re home. From up on top of the hill, at the obelisk, you can see Dun Laoghaire pier, which we also walked the length of, with, of course, a 99 from Teddy’s. That’s an ice cream cone with a flake of chocoalte in it. Yes, even under the threat of rain, with several layers on against the cold, you go to Teddy’s for a 99.

From the obelisk, you can see all of Dublin Bay. You can see the Docklands’ cranes, the new curvy Terminal 2 hangar at the airport, and of course Howth, the mirror image on the northside of Killiney Hill. We all went into town one morning with Gavin, my brother, and his kids, to see once again the bog men and chalices in the National Museum. The rejuvenation of Temple Bar had reached the foot of the Dublin Corporation bunkers on Fishamble street, where my Dad used to work. He would barely recognise the place. I barely did. Cow Lane? I couldn’t remember what was there when I was a student. As usual, I felt like a tourist in my own city. Which was fun. If only it wasn’t so unreasonably, unseasonably, cold. We’re off to Denmark tomorrow, then Helsinki, where we’re told it’s warmer at the moment.