After the Mayan ruins, the comida, the música, and the artesanía, one of the things we wanted to pay attention to on our Mexican trip was the wildlife. As much as we could, anyway, not being up to hacking our way through the dense selva of the Yucatán. No, we would take our opportunities to see the birds, lizards, insects, and mammals of the region as we made our way from Airbnb to eco-village, from Maya ruin to beachside resort.

The highlight so far, I’d say, has been our trip out to the Ria Celestún, the inlet on the northwest tip of the Yucatán peninsula, seventy-five kilometres west of Mérida, to see the flamingos. Actually, that was the one occasion where the sole reason we went somewhere was to see the wildlife.

Despite the vast size of the inlet, these question mark-shaped birds can reach the bottom, and there they stand in great numbers, ducking their crooked beaks under the surface and gorging themselves on shrimp larvae until they turn quite pink from the very colour of them.

Somewhat depleted of birds this time of the year the inlet might have been, down from the tens of thousands it can accommodate, but it was still quite a thing to be able to get within a few metres of the elegant things (at least, when they’re not taking off, in which case they just look like a mathematician running for a bus) as they painted the lake bright pink in the afternoon light. 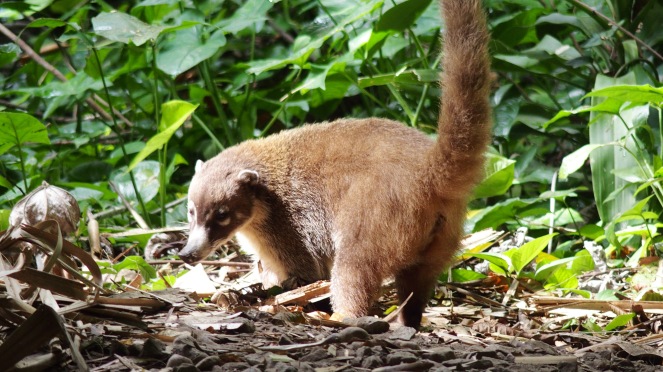 This little guy (above), who we kept coming across in La Venta park in Villahermosa, is a hog-nosed coon, or if you prefer, and I certainly do, a coatimundi. He was erect of tail, and indifferent to whistling and “Here, boy!”s of temperament. A member of the raccoon family, in size he was about as big as a large, coatimundi-sized cat, and certainly not someone we’re used to seeing in the antipodes.

At the ruins at Muyil, on the Costa Maya, the jungle rumbled to the unnerving sound of howler monkeys, but they were too deep in to be spotted. We were rewarded, however, with a sighting of a family of spider monkeys, an endangered species, at the ruins at Chacchoben.

As much as they’ve been a glimpse into a lost civilisation, the ruins have been an on-ramp into the jungle for us, places, often right on the main road, to stretch the legs and give the eyes a break from mile upon mile of dead straight carretera, often as straight as the ancient sacbe upon which they’re betimes laid.

Another regular at the ruins is the iguana; maybe in our rush to announce the cities ‘abandoned’, we might specify which species we’re talking about, since that’s clearly not the case for all of them. On more than one site, I’ve seen vultures claim the role of the priests and nobility by staking out a position in the temple atop a pirámide, while the iguanas scrabble around below among the collapsed masonry ; all this to the barks and subwoofer frequencies coming from the male howlers in the background.

One thing we noticed here in Mexico is that the pelicans are brown, not white, and smaller than their Australian cousins, the ones we’re used to. Also, unlike down under, these ones dive-bomb, stuka-like, for fish. Paddling in the shallows at Akumal Beach, on the Maya Riviera, we saw these compact creatures fly in low in squadrons of half a dozen or so, circle around at a height of about twenty feet, seemingly just trying to find a good spot and soak up the rays like the rest of us, before suddenly dropping a shoulder and plunging shallowly into the water at forty five degrees.