Walking over the rocks that separate Alexandra Headland from Mooloolaba I nearly stood on a sea snake. I made sure it was dead before inspecting it closely. It was silver, with dark bands, and up close you could see it had non-overlapping hexagonal scales. They weren’t perfect, however; it was as if they came from the same mold that produced the basalt stacks at Giant’s Causeway, the odd coastal formation in Co. Antrim in Northern Ireland that we’d visited last Easter. I looked it up later using the photos I’d taken and found it was a Hydrophis elegans; an elegant sea snake. 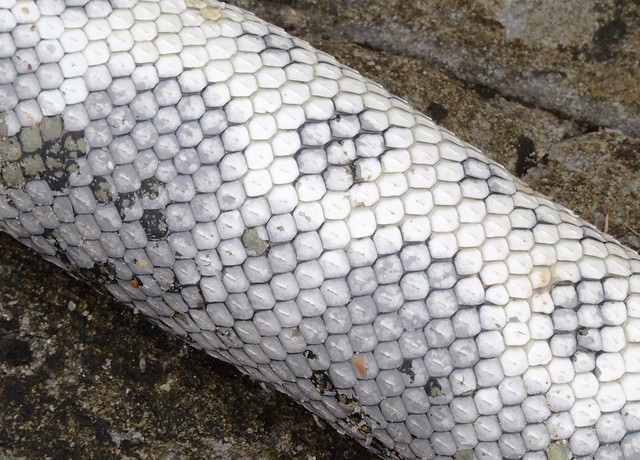 After our initial stay on the Gráinne Mhaol last weekend, we only spent one night aboard her this time. For a start, Alexander and Eoin said they weren’t interested in coming up two weekends in a row. We didn’t push it; they could stay with their grandparents. On top of that, Tina had to work till lunchtime on the Saturday, and the boys were both going back to school after summer break on the Monday morning, so it was just an overnighter for us this time.

The plan had been to take advantage of the kids’ absence by having dinner in a Thai restaurant or somewhere they’d never consent to eating in, but in our straitened circumstances we thought we’d savour the fifty dollars in our pocket more than we would a couple of overpriced Penang curries, so after a walk out to the mouth of the harbour in the drizzle we sat up in the cockpit of the Gráinne and ate stuff we’d brought up from Brisbane. Olives, Camembert (from Coles, mind; this wasn’t some picnic by the Seine here), avocado, homemade bread. The one luxury we allowed ourselves was a $3 single portion of chips from Fisheries on the Spit, one of the chippers on the other side of the Yacht Club. Well, we want to do our bit for the local businesses when we come up here.

As dusk fell I thought how nice it was to come up here with the boys, and how nice it was to come up without them, too. With a pale ale in my hand that I found in the fridge in the galley below that our friends really should have hidden from us, I looked up from my book whenever one of the neon-lit party cruisers went by heading out to the mouth of the river, the strains of ‘Bad Moon Rising’ drifting over the water.

We walked to Alex Heads surf club next morning along Mooloolaba beach, which is where I found the snake. All life was on the beach at the surf club, and nippers – youngsters who might one day, maybe, become Surf Lifesavers – were out in all their pink and purple glory, racing into the waves with their yellow caps, throwing down their boogie boards on the messy surf, supervised by the regular lifesavers in their familiar yellow and red livery. 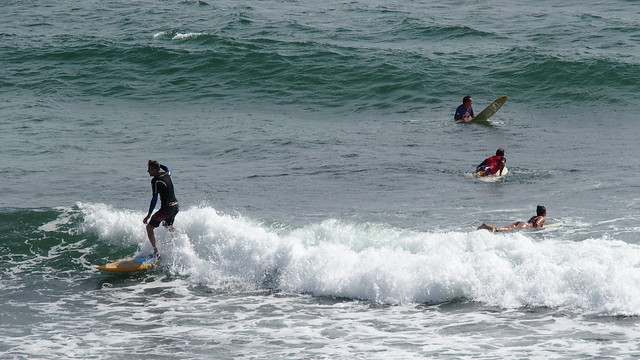 Drying ourselves off after a swim, we watched a couple of the older lifesavers act out a strangely formal ceremony at odds with the chaos all around them. One guy measured out a length of rope from a coil and marched stiffly away with it before setting it down on the sand, turning around, and walking back. We asked an old-timer about this. In the old days, and even today if there’s no alternative, a lifesaver will attach a rope around his or her waist, swim out to someone in trouble, grab them, and get pulled back to safety by another lifesaver on the beach or even just by an alert member of the public. The trouble with that technique, apart from the fact that letting yourself get within arm’s reach of somebody drowning is bad for your health, is that pulling too hard or too quick on the rope will pull the lifesaver (and their charge) under. The old guy showed us the preferred way nowadays for dealing with people who are struggling: a thick, two-metre-long styrofoam noodle, like the ones kids learn to swim with, that can be passed to a drowner without endangering the lifesaver.

On the way back from Alex Heads we stopped at a great old War Dog Memorial, dedicated to the Australian tracker dogs that served in south Viet Nam (sic), from 1967 – 1971. What do dogs care about war memorials? Not much, probably, but the makers had thought to at least include a water bowl at the bottom to allow tomorrow’s heroes to splash some water on their tongues while their owners were reading the inscription.

On the crest of the hill separating Alexandra Headland from Mooloolaba a group of surfies, members of the local Malibu Club, watched proceedings in the water below from the shelter of the Pandanus trees just off the coastal path, their longboards laid out on the grass beside them. We had to keep moving, though, back to the Gráinne, where after a lunch of leftovers we packed up and drove home in the early afternoon. We must do this more often, we decided. Next weekend? Deal.