The Mooloolah river flows into the Coral Sea just south of the seaside town of Mooloolaba. In its final half kilometre it wraps around a spit, enveloping the boats anchored in Mooloolaba Marina that stick out into it on hundred-metre-long arms. On arm C of the Marina is a thirty-five-or-so foot yacht called the Gráinne Mhaol (pronounced Grawnya Wail) owned by our Irish friends Karl and Kara. Knowing they were heading off on an Antarctic cruise in the new year, we asked them around Christmastime if they needed someone – knowing full well they didn’t –  to housesit the Gráinne while they were away. Magnanimously, they played along and said that’d be great, actually. We could keep an eye out in case anything happened while they were away, like a plague of bluebottles or a shower of cane toads. 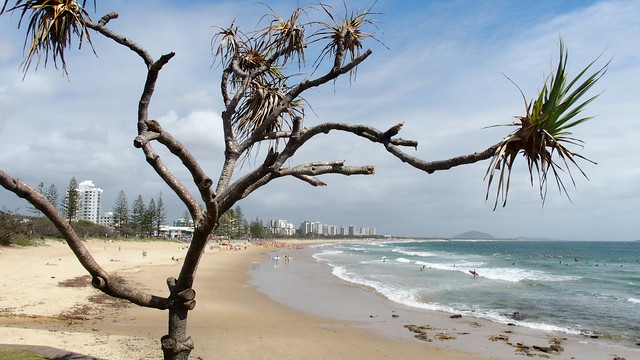 To learn the ropes we drove the hundred and ten or so kilometres up the coast one Sunday morning over Christmas. The ropes, that is, that don’t actually require the boat to move. We weren’t going to be sailing the Gráinne, just using it, if it’s not too strange a thing to say, as a pied-à-terre – somewhere to go for weekends. Karl went over each aspect of the boat that was likely to cause consternation to landlubbers like us – flushing, in the head (toilet), using the compressor in the galley (kitchen), what the electrics switchboard should look like under normal conditions, which portholes and hatches to open, how to turn on and off the various pumps and bilges, activate the stove, switch on the fans – all that good boaty stuff. Most importantly, he showed us his Tagging System. By which I mean: if you open the valve on the gas canister to brew up an espresso, for instance, you have to stick an orange tag (with a rubber band) on the stove to remind you to close it again when you’ve finished. As my Mum the sailor used to say – “Leave things as you found them.” As he went over everything, I took notes, notes I optimistically assumed would make sense when we arrived there for the first time early next year.

On a stinking hot Friday afternoon in mid-January, I picked Tina up outside her work, and with the boys reading in the back, we all drove north, crossing the Pine with about an hour’s daylight left. At sunset we pulled into the Marina and dragged our one suitcase and several backpacks to the end of arm C. It quickly turned out that what had looked simple, what had barely required an explanation at all in fact, when Karl was doing it in broad daylight a month earlier was a different proposition with the light fading and the humidity draining us. We quickly opened the hatches below decks just to get a breeze going, then poked around the cabin like drunks, trying to make sense of our own notes. Mike from Connecticut, who lived in the boat beside the Gráinne, was called in on two separate occasions to reassure us that we’d turned the correct handles, but I was happy to make myself known to a neighbouring boatie in any case.

Once we were settled in and beds had been claimed we got some fish’n’chips from one of the chippers beside the Marina and took it to a park bench overlooking the beach. The lit-up highrise centre of Mooloolaba twinkled through the warm salty night air a kilometre further along the beach. A bottle of white was dispatched quicker than it ought to have been, but these were the good times now, and the sound of the waves quickened my drinking hand. We walked along the beach towards the Esplanade when we’d finished eating, and guessed that the fireworks in the distance must have been at Marcoola or Coolum Beach.

There was treachery afoot in the dark sand, however: a loud pop every now and again meant you’d stepped on a washed-up bluebottle, and if it was followed by a slapping noise then unluckily for you the stingers had flown up and smacked your calf. These tentacles can stay venomous for weeks after the bluebottle has been washed up on shore. You’ll see people burying them for that reason. Eoin got a nice sting on the foot which bothered the little guy right until he went to bed. Reading about these creatures later I found out that they aren’t actually jellyfish, but siphonophores; the gas bladder is just the means by which a colony of individual zooids, or polyps, gets around. To think of them as one creature is like thinking of a ship full of people as one organic unit. 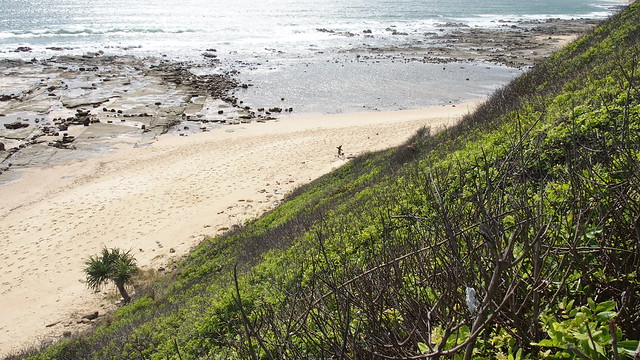 Our first night on the Gráinne was cramped and hot. None of us slept that well, and the kids in particular objected to the various smells of dubious provenance that offended their refined olfactory organs. But proximity to the beach was one of the reasons we’d jumped at the chance to mind her, and first thing next morning we battened the Gráinne’s hatches, crossed Parkyn Parade, and loped through the Pandanus groves to the beach, the south end of Mooloolaba beach. More treachery. An easterly had come up overnight which was bringing more bluebottles in all the time.

Between the flags the blackboard duly warned of “flash rips!!!” and large numbers of “bluebottle stingers!!!” Some people were splashing around anyway, so we did the same for a quick spell, but it was a wary business, not the usual joyful self-abandonment to the waves. From the Surf Livesavers’ hut came loudspeaker warnings of the massed zooid menace, and advice on what to do if you were stung: “The best thing to do to relieve the pain, folks, is go home and have a hot shower.” After five minutes we decided that that was enough tempting fate for one morning.

Clearly a plan B was needed, and we remembered a place not too far south of here we’d been to once when our friend Benny lived up in Caloundra, called Currimundi lake. After lunch we found a spot, placid and wide, just off a residential street a good bit away from where the Currimundi river forms a lake at its mouth, and being there it felt more like swimming in a lake than a river. Alexander and Eoin messed about on their boogie boards, and we sat under a tree watching them in the muggy afternoon. There was a fair amount of river traffic in the form of two-person tinnies going back and forth. Fish occasionally broke the surface, and a couple of guys threw in a net near us, pulling it out after a few minutes with what looked like a decent haul. 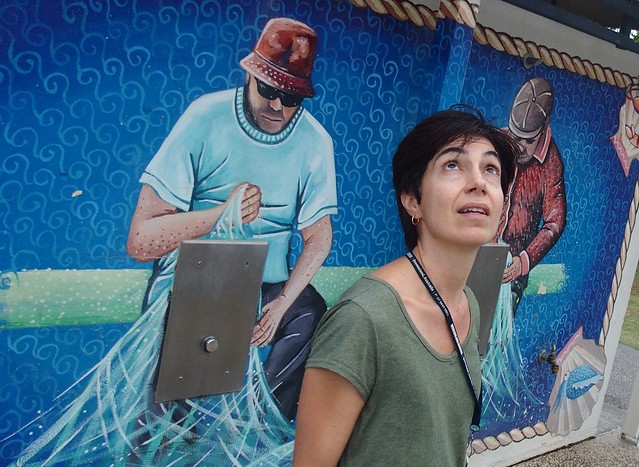 Relaxing that evening in the cockpit up top on the Gráinne, we got chatting to a couple on a similar-sized yacht in the berthing next to ours. They had two kids too and had sailed up from Scarborough, just north of Brisbane. They seemed to be a bit more experienced than our friends and indeed occasionally raced their yacht, they said. In fact, they’d even sailed to New Caledonia, over a thousand kilometres away. Now that’s sailing! As we walked down the arm of the marina with them, both groups heading out on our separate ways for dinner, their youngest kid grabbed me by the hand and swung between me and his Belfast-born mother while we chatted. My two boys had no such confidence, and held back from proceedings, examining a cyanea, or “snottie”, which pulsed in the scummy surface water between a yacht and the marina wall, stuck there like a fly in the jacks.

It was still school holidays; the campsite along the boardwalk above the beach was at capacity, full of these humongous permatents which people here holiday in, same spot, year after year. The crowds in the restaurants were too much on this Saturday evening, so we retreated to the ‘Loo with a View’ with our takeaway burritos, looking out with mouths full at the yellow glowing moon which had just risen over the mouth of the Mooloolah.

We slept better tonight. We had our sea legs now; the gentle rocking of the boat as others came and went around us felt natural. For someone like me, fascinated with the trappings and culture of sailing, but not actually with sailing, this opportunity to boatsit up the coast was ideal. We’re well and truly home now, the big trip is over, and this is as close for the time being as we get to travel.