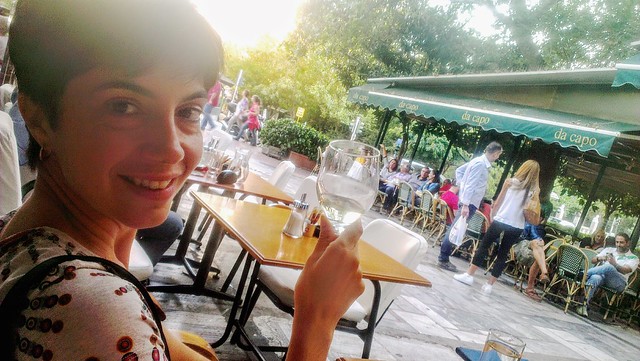 We left Zakynthos the old-fashioned way: by ferry and bus to Athens.  There’s nothing like being on the water to make you feel like you’re leaving or arriving on an island – coming by plane just can’t compare. On a calm sea we slowly watched Zakynthos turn into a hazy blur on the horizon, a slightly darker blue meeting the ultramarine of the sea.

For the end of September, it was unusually hot in Athens.  The Friday afternoon traffic held us up but we finally arrived in our modest little apartment. Once again we chose to use AirBnb for the luxury of having a bit more room in which to spread out and for the option of eating in if we wanted. We were in the Pangrati district, just a quick walk across a park from the Evaggelismos metro stop and, most importantly, the Airport Bus. Walking into Syntagma Square, the epicentre of Athens, took about 15 minutes, except for the time we ended up going in circles in the National Gardens trying to find an exit.

With only two full days in Athens we knew we weren’t going to able to see everything we wanted so we approached it with a game plan. Our first stop on Saturday morning was the National Archaeology Museum. We wandered through the exhibitions of Cycladic civilisations, gazed at the golden hoards from Mycenae, and followed the development of Hellenic sculpture, from the stylised Archaic period to the naturalistic apogee of the high classical period. 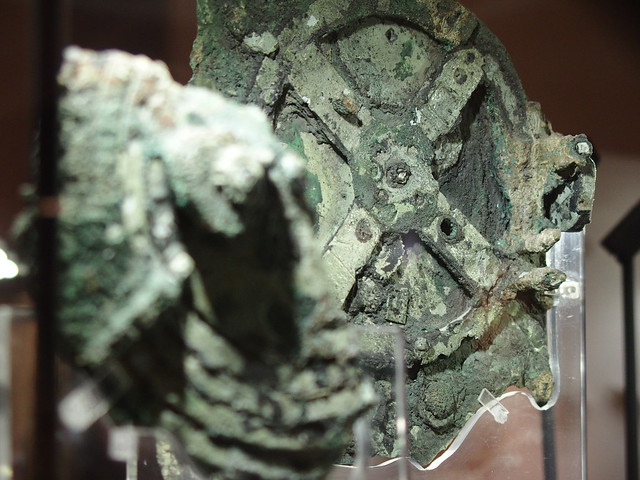 By this time Alexander and Eoin were starting to wilt so we played our trump card – the Antikythera Mechanism.  Admittedly, it’s not much to look at, but the story behind it is fascinating.  Found in the early 20th century by sponge divers on a roman-era shipwreck near the isolated island of Antikythera, it remained a puzzle for almost a century.  Since it was only a small device, originally made of wood and bronze, it wasn’t until 2006 that scientists were finally able to figure out what is was: the world’s first analog computer, designed to predict planetary positions and lunar eclipses for calendrical and astrological purposes, as well as the Olympiads, which were the cycles of the ancient Olympic Games.

It was time for lunch: we walked down through Omonia, then down Athinas to the food markets, passing by the vegetable, meat and fish halls, and enjoying the street-side displays of herbs and nuts.  We found a unpretentious little café, chose from the day’s dishes and rewarded ourselves with a rare meal out. 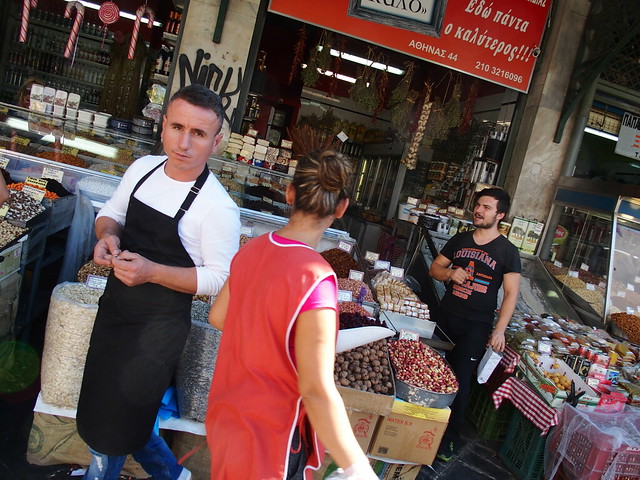 While Ralph and the boys headed back to the apartment for a rest, I visited Melissinos the poet/sandal-maker, and picked up a nice pair of sandals as a memento of Athens.

In the afternoon we went our separate ways again.  The men went to the War Museum, just a couple of blocks from our apartment, and I went a bit further to the Benaki Museum, which is housed in the neoclassical mansion of the Benaki family. Its collection spans antiquity right up to the creation of the modern Greek state in 1922. By this stage I’d seen a lot of pottery and gold so what really delighted me where the folk exhibits of weavings, traditional costumes and interiors of houses. Their gift shop is also worth a visit and we purchased some reproduction antique maps of the Peloponnese. I reunited with the boys again at Kolonaki for a drink and they reported that the War Museum had a gift shop splendidly furnished with Airfix models, two of which Alexander and Eoin had fooled their Dad into buying.