This guy got up from his seat two rows behind us on the Toulouse-Nîmes TGV to have a go at the family in the four-seater space opposite us, whose kids were – fair enough – being a bit noisy, albeit harmlessly so, I felt, since they looked like nice people, and you could tell the kids were smart, and while naturally I couldn’t catch everything the guy was saying it was definitely some sort of appeal to the mother to keep the kids’ jabber down, but she, long-legged and splendid of hair, kind of like Michelle Obama, tranquilly rebuffed his every plaintive “Mais Madame…”, explaining that kids will be kids, and saying “That’s just how they are: I don’t have a choice.” to which he answered “Moi non plus, Madame”, turning away, having failed to receive satisfaction, whereupon the father, hitherto uninvolved, offered the guy a desultory “Desolé”. 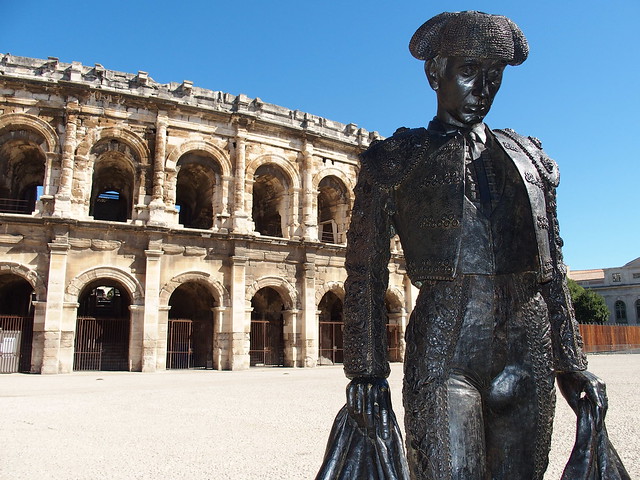 The guy had the hump because instead of ploughing through Languedoc-Roussillon which he should have been doing, to his consternation he found himself, like the rest of us, immobile in a field somewhere between Carcassonne and Lézignan-Corbières, apparently on account of an accident, which the driver, who’d been on the intercom a couple of times by that stage to keep us au courant, was now warning us would cost us all a delay of up to two hours, this accident would, the victim of which we saw half an hour later, covered up with a blanket by the side of the tracks and surrounded by gendarmes when finally, and at a snail’s pace, we transited gare Lézignan-Corbières, wondering what had happened exactly, but imagining, me at least, that it must have been a suicide, this accident.

“It takes a long time to find all the body parts.”, a German guy in a singlet facing me across the aisle said helpfully to the two English guys he’d been chatting to beside him, during which I learned that he’d been to all the Euro 2016 games so far, the German guy, and had even been to the drubbing his country gave the hosts of the last World Cup, but the train was picking up speed now, and we were finally near the coast, past Narbonne, where the family with the noisy kids had got out, the pinking sunset to our left, and the grumpy guy shushing a pair of German guys talking – fair enough – a little too loudly, and nearly two hours en retard we arrived at Nîmes with our plans for the evening – nothing special, maybe a walk around the ruins – let down, and with barely any daylight left we stood outside the station with our suitcases and backpacks, happy to finally be in the south of France, having all left my Mum’s house in Dublin that morning, where we’d spent the last ten-and-a-half months.

The ebbing day’s warmth and the evening’s fragrance persuaded us not to catch a taxi from the gare to our Airbnb apartment, as we’d planned, the small place we were going to be staying in for the next two nights, but to drag our stuff straight up Avenue Feuchères, along the aqueduct water feature running its entire length, all the way to Les Arènes, the Roman coliseum-type edifice, still used, can you believe?, for spectacles with animals, and to make our own way to the apartment. Despite the hour, parents were still out walking with young kids. We relaxed a little, telling ourselves we couldn’t help the delay, and anyway, people do things later here on the continent, don’t they?

On our way, we couldn’t help but laugh at the strange choice of name – SKAB – on a toney-looking restaurant on Rue de la Republique. Just past it, a bar with a much better name, Le Tout Va Bien. Looked like a nice place to have a late one. Maybe tomorrow night. Up this street we went, down that boulevard, until finally we found Rue François 1er and sat our weary suitcases down on the narrow trottoir, trying the doorbell of our place, whereupon Julien, the owner, appeared.

A globe with a Mr. Men cartoon book propped against it – Mr. Happy (Mr. Content) – was a nice touch. A large pink flamingo, a well-kept guitar on a stand, a bicycle – vertical, propped in the corner, postcards from all over the place on the fridge. Julian seemed nice and not at all put out at our late arrival. He said he was a pompier, a fireman, so he knew how events such as the one that delayed us can affect things. Like a lot of people we’ve met on Airbnb, he was a keen traveller, and when he handed me the keys to the place I felt in the sweat of my palm a tiny laminated boomerang from the time he went Down Under. He’d been doing Airbnb rentals for two or three years at that stage, ever since he moved into his girlfriend’s place nearby. Once this season was over he was off to explore Myanmar. 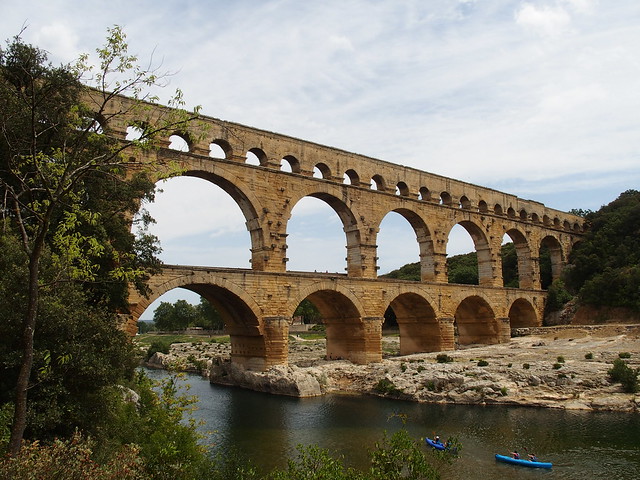 Because of the unreasonableness of the hour, we hadn’t had a chance to buy anything like cheese, wine, or bread. Julien took a bottle of Muscadet out of the fridge and told us to help ourselves, pas de problème.

Tomorrow, we’d catch the bus to the Pont du Gard, one of the highlights of the many vestiges of Roman occupation of the Midi. We were in Nîmes and we had a plan.

As I lay in bed with the fan on, I looked at the wall-sized map of the world and thought it funny how small, how absolutely tiny Europe is, this continent we’re lavishing so much attention on.

2 thoughts on “From Dublin to Nîmes”