At the end of a raw spring week sleet and windy, Sunday turned the corner into May, ready to make amends. That morning we stepped out of our Theseus Walk Airbnb pied-à-terre and caught the number 38 bus to Charing Cross Road, ready to take it on foot from there. 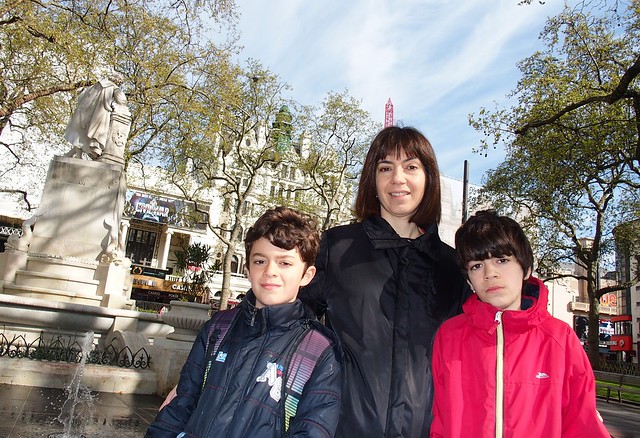 Maybe I’d been listening to too many Shane MacGowan songs, but I’d forgotten how pretty Leicester Square can be when it’s quiet and the weather’s good. Thick with tourists, touts, and down and outs as it usually is, it’s hard to appreciate its prettiness under normal circumstances, but on May Day we got to see the square with the Bard and the Little Tramp in a clean light, and it was nicer than I’d imagined it would be.

We rolled downhill to Trafalgar Square, which seems to have a lot less pigeons than it used to have. Tina took Eoin in to The National Gallery to see Van Gogh’s Sunflowers which he’d read about at school and was keen to see up close, while Al and I moseyed around the square now you could actually walk in it without tripping up over the birds. 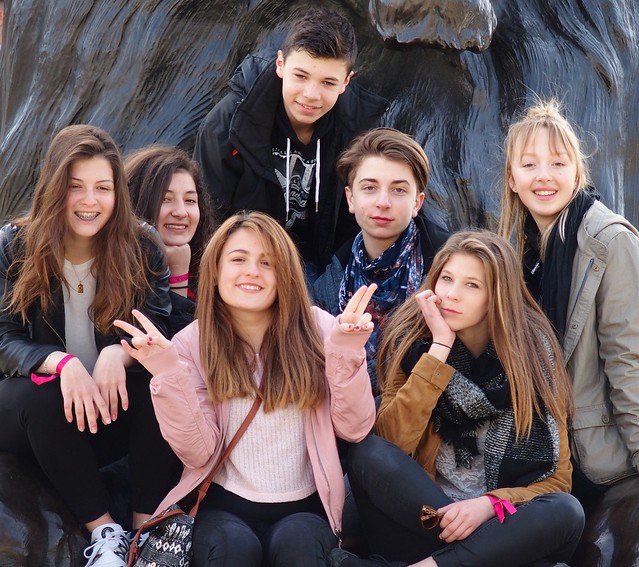 French students on one of the lions at Trafalgar Square

We had a midday rendezvous with Nathan, an old friend from Brisbane who moved to London a decade ago, so we kept moving, right through the heart of the empire, up Haymarket now, by Eros at Piccadilly Circus, skirting the bottom of Regent Street which we’d be back in tomorrow to visit the serenading salesfolk in Hamley’s, reaching St. James Park where we met Nathe and his wife Ali.
“My God, this weather’s glorious.”
“It was shithouse during the week. This is the first good day we’ve had. Let’s head up to Covent Garden.”
“Lead the way.”

On our right as we went up Horse Guards Road the people queueing up for the Churchill War Rooms had the right idea, getting out of the sun for a short while. Through Admiralty Arch we saw Nelson’s Column a second time, then burrowed up St. Martin’s Lane into the heart of theatre land, stopping for a swift one in The Salisbury. Well, it would have been remiss to pass by such a celebrated traditional pub, one that features in The Boat that Rocked and Victim apparently. We turned down New Row into Covent Garden where you have to stop for some reason to watch the unfunny magician/street entertainer types with a headset who involve hapless Dads in their unfunny shtick and drag it out so long. Not a fan. “Stop slacking off everyone, we’ve stuff to see.” 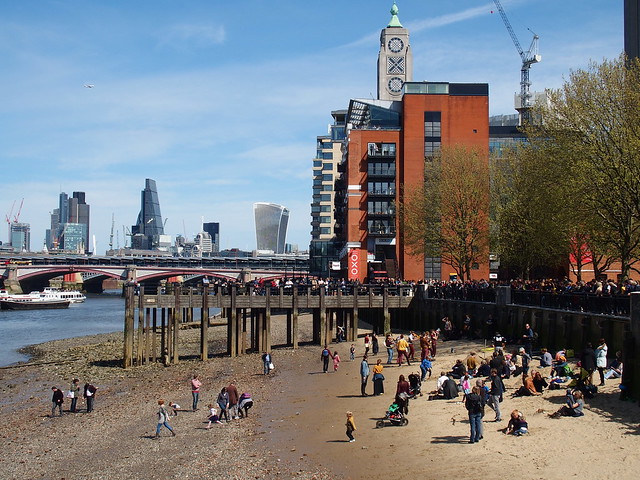 Waterloo Bridge opened up the vista along the Thames at last, and took us to the South Bank, a magical place where I used to watch violent Japanese films in the NFC when I lived here all those years ago, but which by this Sunday lunchtime was thronged with fellow lunchgoers, struggling like us to get in anywhere, having to sit right at the back of a chain bistro if we wanted to sit anywhere. Skatepunks did their thing in the skatepark, upbeat mariachi music drifted from somewhere, and the booksellers’ tables made the embankment look very rive gauche.

After lunch we resumed our perambulations on the Queen’s Walk going east, and soon found ourselves at a space called Gabriel’s Wharf where a brass/funk/megaphone-totin’ ensemble (which you can see on the sand in the picture above in line with the Oxo Tower) playing down on the Thames shore sent festive vibrations into the air, vibes that were perfect for the occasion, so we dallied for a while as you do. 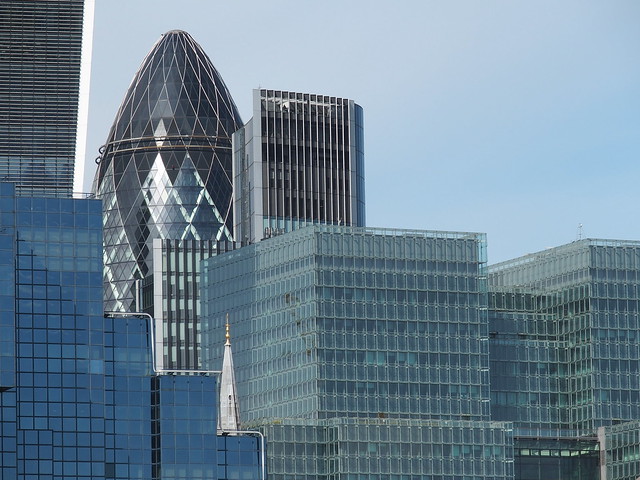 The Gherkin. The Walkie-Talkie looms high on the left.

Blackfriar’s Bridge, the Tate, the Globe, the Clink: waypoints eastward towards Hay’s Galleria, where The Golden Hinde recalls the era of the tall tea clippers from India and China which edged their way into the dock 150 years ago, when it was known as the “Larder of London” because of the amount of food which passed through the area. Shackleton’s Quest even stopped off there in 1921.

Across the Thames, monumental buildings like St. Paul’s, the Gherkin and the Walkie-Talkie helped us orient ourselves. Of course, right behind us was the Shard, at 310 metres tall hard to miss, but at £74.95 for a view from the top hard to justify. At HMS Belfast, just before Tower Bridge, we called it a day, waked around City Hall (yet another of Norman Foster’s towering erections) and found the nearest hostelry that would furnish us with a restorative pint and crisps. The Bridge on Tooley Street, one street in from the embankment through Potters Fields, would do, and there, over a pint of Spindrift, we stopped walking and got some Walkers, waiting for Simon to turn up. 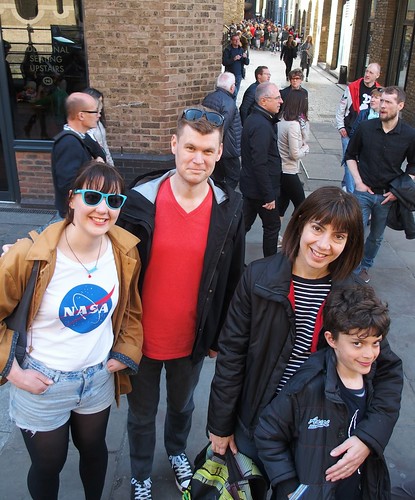 Ali, Nathan, Tina and Eoin at Hay’s Galleria, near the Clink, Clink St.

Last August we met a family who were on their way out of Ireland just as we were settling in for the winter. We met them because we’d been following their blog, Our Global Adventure, which describes the family’s travels, travels not entirely unlike our own since they were gadding about en famille too. When we decided to go to London we contacted them since this is where they’d moved to for the time being. Simon joined us in The Bridge just in time for the second round, and it was good to catch up with him and the kids. We spoke about what it’s like to housesit here, housesit in France, and all that other good travelly stuff. As to living here, Simon has this to say:

“I don’t think that I would want to live in London anymore. It’s really, really busy. Housing is ridiculously overpriced and everyone is working too hard to make a life there. I just don’t think that after all the changes that we have made to our lifestyle we could return to both working full time just to pay the bills.”

Nathe and Ali estimated they saw more houses than the lad from Grand Designs before they eventually ended up buying in West Ham. Both Tina and I have lived in London – separately – at one stage in our lives, but, like Simon, we wouldn’t want to live here anymore. If it wasn’t so remote from Europe, I’d think our home town, Brisbane, was unbeatable. But London is the best city in the world to spend a weekend in, hands down, especially over May Day.