Our travels took us to London this past weekend, and to a part of town we weren’t at all familiar with: Angel. Sandwiched between the City Road and Regent’s Canal, our Airbnb place at Theseus Place took us along the calm waters of the canal with its colourfully inhabited barges each time we came and went to Angel tube station, even if the place itself lacked ‘street appeal’. To judge by the posters and books inside, though, the Frenchwoman who owned it was obviously a big Star Wars fan, so we felt the force was with us the whole weekend. 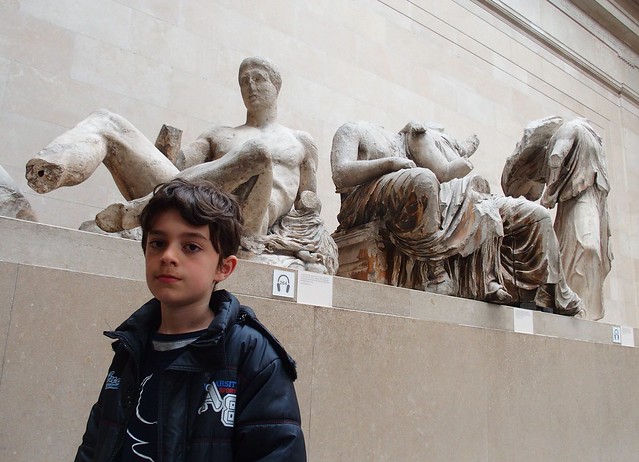 Eoin at the Parthenon Sculptures in The British Museum

In the lead-up to our trip, we’d worked Alexander and Eoin up to a frenzy about The British Museum (although it was probably more the gift shop they were interested in to be honest) so straight after we’d settled into our canalside pied-à-terre we caught the number 38 bus down to New Oxford Street from where we briskly nosed up Museum Street through the busy pavements, turned right onto Great Russell Street, went into the Museum courtyard, took some photos, and ascended the steps of the great columned facade with the hordes to shuffle reverentially into the Great Court with its geometrically-patterned glass ceiling, at which point we felt that our London trip had properly started.

In the West Wing we made straight for our old friends the Elgin Marbles. Beaten-up and broken they may be, but there’s no denying the grandeur of their setting in these spacious and elegant halls built only for them. It’s possible to think, as many do, that there’s something amiss with them resting here in perpetuity while at the same time acknowledging that they are indeed displayed on a world stage for all to enjoy, gratis, here in Bloomsbury, in the heart of the empire, which is the main point made by the Trustees of the Museum in response to periodic requests from the public and the Greek government that they be returned whence they came, viz. Athens. 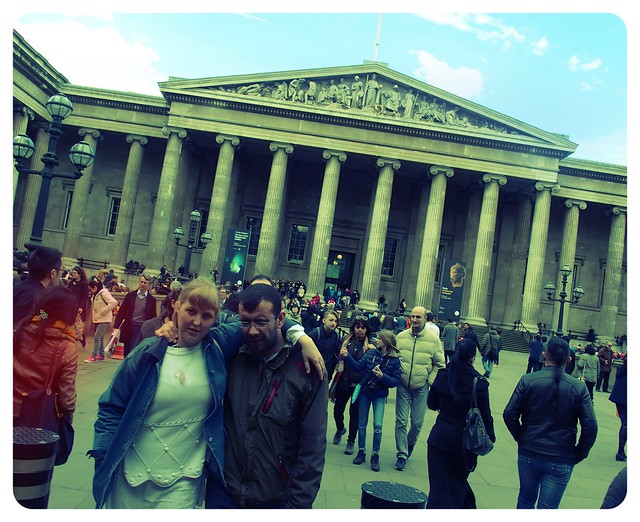 Courtyard outside the Museum

The Trustees explain their position on the Museum’s website: the Museum’s horde, which constitutes 30% of the pieces that weren’t blown up by the Venetians several hundred years ago, is not known as the ‘Elgin Marbles’ anymore: the correct designation is ‘The Parthenon Sculptures’. They’ve been on permanent display – for free – in the Museum for two hundred years, and there they shall remain. What’s more, it’s not as if they’ve all been commandeered by the Museum: just as many (30%) are in the new(ish) Acropolis Museum in Athens, not to mention the six other museums throughout Europe hanging on to some, among them the Louvre and Kunsthistorisches Museum of Vienna. So, no, they’re not going to be given back to Greece any time soon. Good day, sir!

“Lord Elgin, the British diplomat who transported the sculptures to England, acted with the full knowledge and permission of the legal authorities of the day.” is how they swat away allegations of vandalism of misguided Hellenophiles like Lord Elgin. The problem with that statement, as any Greek will tell you, is that those authorities weren’t Greek, but Ottoman.

But the thing is, they can never be placed back on the Parthenon itself at this stage, apparently, so you’re going to be seeing them in one museum or another. When we go back to Athens we’ll take a look at what they have on display there. But today we were here to enjoy what was here, and that’s what we did, like the thousands of others all around. Alexander and Eoin had actually been to The Parthenon seven years earlier, so they could understood the context of the sculptures. 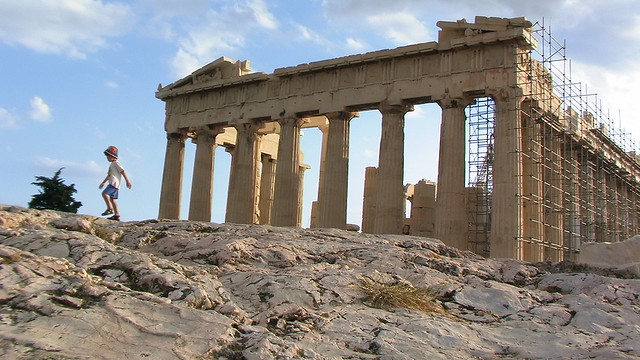 Alexander at the Parthenon, July 2009. Note the denuded areas at the top of the columns

But they were also interested in seeing the beautiful Mixtec/Aztec turquoise double-headed serpent which I have to admit is a beautiful and surprising artefact, so kudos to the pair of them. They’re at the age now where they can teach Tina and me a trick or two in a museum.

The Rosetta Stone is another of the big-ticket items in the Museum normally hidden behind a thick layer of glass and irritating people who got to the Museum before you did, so when I found a copy of it in the Library, a copy you could actually touch, I realised how much I wanted to touch it. It’s funny; running your fingertips over the lettering, even of a (very convincing) facsimile, is the most natural thing to do. It’s not enough to just look at it. You want to feel the words. 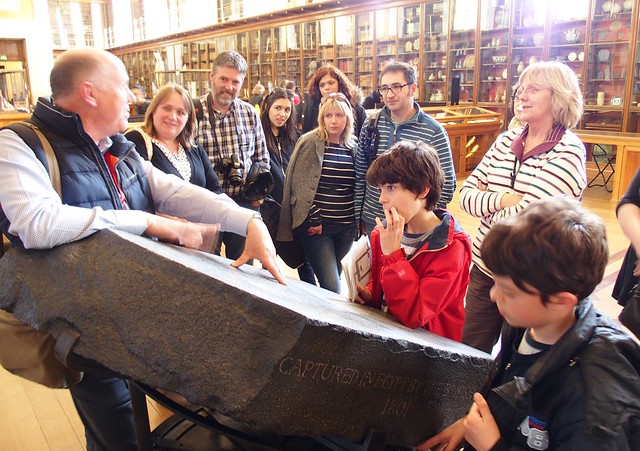 In a library in The British Museum, with a touchable copy of the Rosetta Stone

Yes, entrance to The Museum is free, but let there be no doubt about one thing: as a parent you are not walking out of this place in the same financial shape as you walked into it. So many wonderful books. We’re currently watching Mary Beard’s show on BBC about Rome, and her companion book SPQR was everywhere tempting me. Same with the heavily touted (piles and piles on shelves everywhere!) A History of the World in 100 Objects by Neil MacGregor. I only snapped out of it when I had to pony up for Al and Eoin’s haul from the shop.

Fiscally diminished and culturally enriched after a good two hours here we stepped out again into the courtyard to start to make our way back home. It was late afternoon and getting cold, but we felt like wandering up through Russell Square with its great hotel and eventually came to a park Tina had discovered online called Coram’s Fields where we sat down and chatted about how great it was to be back in London while Alexander and Eoin climbed up a wooden castle in the kids’ playground. It was our first time back in sixteen years; their first time ever.

One thought on “A little piece of Greece in Bloomsbury”