This year’s parade was our first St. Patrick’s Day Parade here in Dublin. Of course, having grown up here, I’ve been to my fair share of Dublin parades, but not for a long time. Not for twenty years or so. 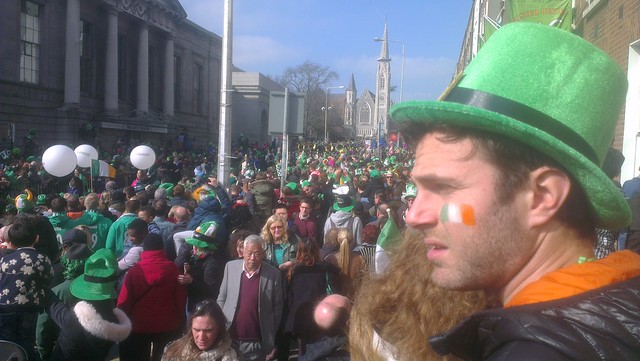 Looking up the east side of Parnell Square towards the Abbey Presbyterian Church. Well, I am. He’s looking down O’Connell Street. It’s that visual contrajuxtaposition that makes this picture work.

They throw a decent parade in Brisbane and we’ve been to a few of those over the years, though I fear that the Irish Club on Elizabeth St. won’t be there when we get back. So going to the parade here had long been on our agenda, and we weren’t going to miss it come rain or shine. Came shine, mercifully, and on the Thursday morning we drove into town and parked in a street of unsalubrious aspect between Mountjoy Square and North Circular Road.

When I was a kid the parade was just a parade and it started at Merrion Square. Now the parade is the start of a three-day festival, and the parade itself starts up near the Garden of Remembrance on Parnell Square, goes down O’Connell St., wraps around College Green, heads out west along Dame Street, before finally turning south down Patrick St. and ending at St. Patrick’s Cathedral, appropriately enough I suppose. 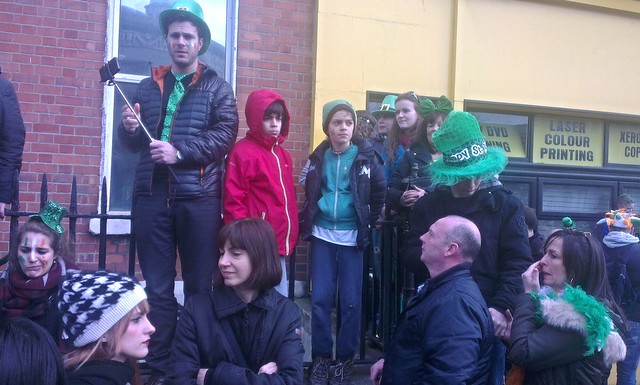 Alexander and Eoin had to climb up onto the railings outside Cassidy’s Hotel just to see anything. The man looking up at them helped them up and was nice. “Wear something green.”, we told Al.

Walking down from Mountjoy Square we turned at Gardiner Street and headed for the Parnell obelisk at the top of O’Connell Street along a stretch of Parnell Street I’ve heard called Dublin’s Chinatown, pedestrianised this morning. Life was out on the street there, dressed as a leprechaun, speaking Spanish, Portuguese, and Chinese.

Taking up a position opposite the Gate Theatre outside a hotel called Cassidy’s on the Georgian strip called Cavendish Row which is better known as the bit of Parnell Square opposite the Gate Theatre we’d left it a bit late, and weren’t going to see much. The parade was about to start and Alexander, and especially Eoin, wouldn’t be seeing much. Around us, couples stood on step-ladders and children sat on their father’s shoulders. Eoin’s a bit too old for that now, and I’m a bit too old for that now, so Tina got them up on the railings away from the hordes of tall Americans whose massive leprechaun hats (see the picture below) only made things worse, the goddamned sonsabitches. 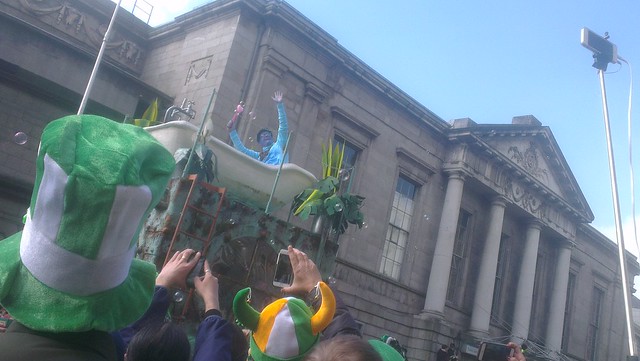 Nowadays when you go to an event such as the St. Patrick’s Day Parade you just end up photographing other peoples’ selfie sticks. When I was a kid there were no selfie sticks.

As far the parade itself – ah, sure it’s always the same as far as I’m concerned. Some nice samba music. Some nice dancing. I can take or leave the giant Macnasesque heads that signify young people or Ireland’s future or the internet or cats or whatever.

I was standing next to a Nigerian guy who asked everyone who passed by that he knew “Where’s your green, man?” if they weren’t festooned in sartorial paddywhackery like a shamrock-ringed hat or a ‘Kiss me for Luck’ tie like he was. He was good crack. It was his fourteenth parade.
“What happens after the parade?” I asked him.
“Madigan’s.” 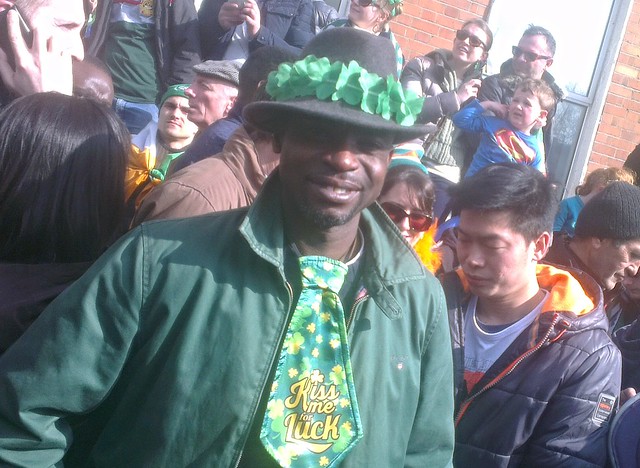 Time was, I treated St. Patrick’s Day the same was everyone else did and still does: as an excuse to spend the rest of the day in the pub. Those times are long gone, and I was crap at them anyway. Nowadays I’d just be completely out of my drinking depth being in Madigan’s at lunchtime. And anyway, after an hour and a half of standing there on Parnell corner, watching the seemingly interminable procession of well-thought out, high-concept, paradey stuff, it was time to go. We had to get to Northern Ireland for a mini-break (stay tuned to this very blog).

Being a southsider, I struggled to efficiently convey us in our rental car over the Royal Canal and then through Drumcondra to the M1 heading north. The crowds didn’t help. Having escaped the masses in the city we now ran into all the GAA fans assembling near Croke Park for the All-Ireland finals. One last push, one last right turn at the Mater, then down by St. Ignatius Road, and we were through. And that’s another St. Patrick’s Day Parade survived. Our first ever in Dublin.