Ruben was in a restaurant one night in October when he got a notification on his phone of a Couchsurfing request – two adults, two kids – for the beginning of December. “A family with two young boys: that could be really cool or it could be a real disaster”, he thought. “I’ll take my chances.” He accepted the request.

Considering that by Christmas we’d be bang in the middle of our European project it seemed only natural to make a pilgrimage to the centre of the European project – Brussels – to do some Christmas shopping. So we organised flights and went on couchsurfing.com to find somewhere to stay. That’s what we tend to do if we’re just going somewhere for a quick weekend. And lo, we quickly found a fellow called Ruben living in Anderlecht who was willing to host us (and in fact we got another offer from a guy in Saint-Gilles to fall back on should we need it).

I only knew the name Anderlecht from when I was 8 and into soccer like everyone else my age. But just like almost all of those other European soccer team names, like Ajax, Porto, Lazio, etc., Anderlecht meant nothing to me as an actual geographical place, a place people lived in. I mean, where would you actually go to meet an Ajaxian? Whither a Portian? Who cared? They were cool football team names. So I never found out what that word Anderlecht meant until we checked Ruben’s profile. Turns out it’s a suburb south-west of Brussels city centre, catered for by a stop called Bizet on the metro. Nice. And, we were going to be staying on a street called Claude Debussy. Extra nice.“I don’t know exactly what I will be doing that weekend, but hosting shouldn’t be a problem. We can arrange more in detail somewhere in the beginning of December?” said Ruben, sounding Australian? I saved the dates and the details in Tripit, and started reading all about the Grande Place and the history of Brussels.

I hadn’t been there for twenty-one years, not since my brother Gav worked as a barman in a pub in Ixelles, another of Brussels’s suburbs, and neither Tina nor the kids had ever been. So really, it was like we were all going for the first time. At Christmas time! We were going to go to the Christmas markets, les Marchés de Noël, in the centre of town, with a side trip to Ghent at some stage. Funny – everyone I mentioned our upcoming trip to said one thing: “Go to Bruges! Bruges is great!” Yeah, we thought about it, but as well as being far away, Bruges’d be crowded. A day trip to Ghent, on the other hand, wouldn’t mean being stuck on a train half the morning.

Then came the attacks in Paris on the 13th of November. To our surprise, given it happened in a different city, one of the effects of the attacks was to jeopardise our trip to Belgium. It began to seem like we might fall foul of the authorities’ clampdown in Molenbeek, the suburb beside Anderlecht. Incredibly, Brussels, Europe’s de facto capital, and a place where not much happens, ‘went into lockdown’. Late-night police raids were carried out to target a network, connected with the one that carried out the Paris attacks, of the tiresome rageboys plaguing Europe’s house. More raids near Liège in the east, and Charleroi, south of the capital. Charleroi to us is no more than a waypoint we use to get from Dublin to Zakynthos. Let them raid it. But who wants to visit a city with soldiers walking around its tourist quarter, helicopters flying around, and with the metro shut down? The police evacuated restaurants in the famous Rue des Bouchers in the centre of Brussels, blocked off roads, and closed schools, much to the delight of children and terrorists. On the Sunday morning of the lockdown the market at the city’s Eurostar terminal Gare du Midi – one of the biggest outdoor markets in Europe – was called off. Brussels quickly became a city where one might well find oneself – quelle horreur! – unable even to purchase a waffle.

We wrote to Ruben in late November: “We obviously want to visit but not if the centre of town is locked down and the metro’s not running. What’s it like there now? Will the Christmas markets take place, do you think?”
“I understand your concerns.” he wrote back, “Brussels has had better weeks. The metro is running again and tomorrow they will decide what they will do with the Christmas market. And actually, there is not really a locked centre, there is only a lot of police and some soldiers. I’ll even have dinner at the city centre tonight. Anyway, I’ll keep you posted about the Christmas market.” Two days later he wrote again: “As promised an update about the Christmas market: it opens today and it will take place as foreseen. Everything in the city centre seems to be again as before the attacks in Paris. Also, yesterday the ‘terror level index’ dropped from 4 to 3. That is still higher than normal, but more in line with the neighbouring country’s.” He meant France. Même pas peur, we’re going.

Ruben and Tina at Place Sainte-Catherine

He met us straight off the airport train at Gare Centrale. Tall, thin, and with near-perfect English, Ruben is a friendly young guy who as well as being a computer hardware engineer is studying for a degree in philosophy in his spare time. Even though couchsurfing is god’s gift to people like us, allowing us to explore foreign-language countries on the cheap, you always need clear communication in a common language (English, in our case) to ensure a smooth rapport between you and the stranger whose house you’ll be staying in for free. So while on the one hand I would have preferred Ruben to be weaker at English and therefore more likely to indulge my desire to practise speaking French, on the other hand, for logistical reasons, it’s always a relief to hear your host speak good English. “In Brussels, French is the language of the street, but they might speak Dutch at home. The culture in Brussels is different to the rest of Flanders. A lot of people see it almost as a foreign city.” he explained.
“That’s certainly how I see it.”
“No, I mean Belgian people.”

Too late to do anything remotely Brusselois that evening, we went straight back to Bizet on the metro, passing Jacques Brel station en route. His local metro station might have had a nice musical name but we wouldn’t be hanging around there any more than was necessary – no time. His front room, with a flat screen TV which we never used, of course, a sofa bed with sundry pillows and pouffes – it was all ours for the weekend. In any case, Ruben himself normally sleeps downstairs, since (as we found out) the wooden floor belonging to the Turkish family upstairs can be a little noisy at nighttime.

Once we unburdened ourselves of our luggage we headed out again for takeaway frites and croquettes at a chip van of his choosing – we can do the fine dining tomorrow and the day after – and took them back to his place. He placed a selection of bottles of strong beers on the table: Duval, Chimay, some 11% Trappist stuff – all small, dangerously tasty, and deadly. When Tina and the kids had gone to bed, I chatted to him in French, and to his credit he took my lead without batting an eyelid. For the rest of the weekend, all I had to do was say something in French and he’d follow suit and stay ‘in character’ as long as I did. This, despite the fact that as a Flamand his mother tongue is actually Dutch. But come on, this is Babel, I mean Brussels, so he works in both Dutch and French, and happens to be fluent in English too.

Given the names of the metro stops I mentioned, and the street we were on, Claude Debussystraat, I felt like a question about music was in order.
“What sort of music do you like?”
“Do you know Stromae? It’s from ‘maestro’, spelled backwards, sort of.” Even though he’s huge in Belgium and Europe I’d never heard of him. (I can’t name a single Jacques Brel song either, to my shame). Opening another Duval each, we watched one of Stromae’s videos, “Formidable”, where he pretends to be drunk – I’ve done that loads of times myself – and sings en plein Bruxelles, at least until the flics come and ask him what he thinks he’s up to. But they do so nicely, because of course they know who he is. Hell, they even admit to being big fans. Nice video, 131 million views if you don’t mind, and shot just down the road from where we were. All part of the culture we’re here to learn about. Time for bed. 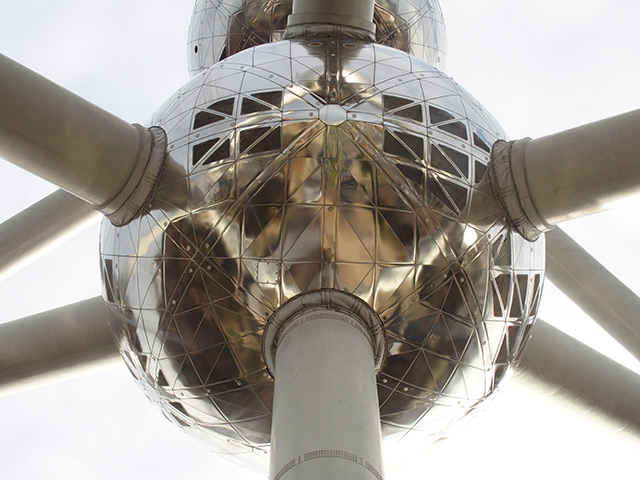 Saturday dawned, a grey day with a spattering of light rain doing us no favours. We’re not going to Ghent. It was insane to imagine we’d have had time to do that, with so much in Brussels itself to see. Ruben told us to help ourselves to cornflakes and milk, but we didn’t come to continental Europe to have cereal in the suburbs. Well, Tina and I didn’t. The kids stuffed their faces, naturally. Then we hit the centreville. Brussels, at last. Ruben gave us a tip about a good, traditional style café near the Bourse, so that’s where we headed.

By the time we got a table at Le Pain Quotidien, in a street near Eglise Sainte Catherine, had sat down and ordered (for me, le Manhattan: œuf bio à la coque, saumon fumé, ricotta, baguette bio), and taken out that morning’s Le Soir (“1er journal à Bruxelles”) I would have eaten a horse, non-bio or not. There was a communal round wooden table around which people conversed, undoubtedly – given the level 3 alert still in place – about stuff like l’équilibre entre sécurité et libertés, philosophical stuff like that that francophones love. The boys behaved themselves, people around us spoke more-or-less intelligible French, politely. Here comes my coffee. It’s all formidable.

What’s in the paper? There was an interview with the mayor of Brussels, Charles Michel, in which he says that the decision to shut down the town centre last month was the hardest of his life, but it had been necessary to keep one’s cool – la necessite de garder son sang-froid – in the face of the terrorist threat. And in Paris, “rudes négociations entre 195 pays” were going on at COP21 , the summit on global warming at that moment, apparently. I folded the paper and put it away: we’ve got sights to see.

In part 2, we go to the Atomium, the Christmas markets themselves, then explore the Parlamentarium and have moules frites.

4 thoughts on “In Brussels for the Christmas markets”