We’ve been keeping pretty quiet lately since our last weekend away in Kerry. After school/work/study during the week it’s tempting to just relax on the weekends.  We’ve settled into a routine of strolling down to Dalkey village for coffee and a visit to the library on Saturdays and then spending the afternoon reading the papers and just generally relaxing.  Sunday occasionally we venture out for a drive or excursion.

Striking a pose by the river

On a blustery, overcast day last weekend we made the drive down to Glendalough.  It was raining intermittently and having timed it to get there about an hour before the light would start to fade we thought we would have a good chance of having the place pretty much to ourselves as we’d had at Clonmacnoise when we went there a few weeks ago.

We were quickly disabused of that idea as we pulled into a fairly full carpark. If it’s this busy on a cold, wet and windy November afternoon just before the site closes I dread to think what it must be like in summer.

It wasn’t just people visiting the site; there were loads of locals walking on the lakeside trails, and serious hikers in full body waterproofs and all the fancy gear. 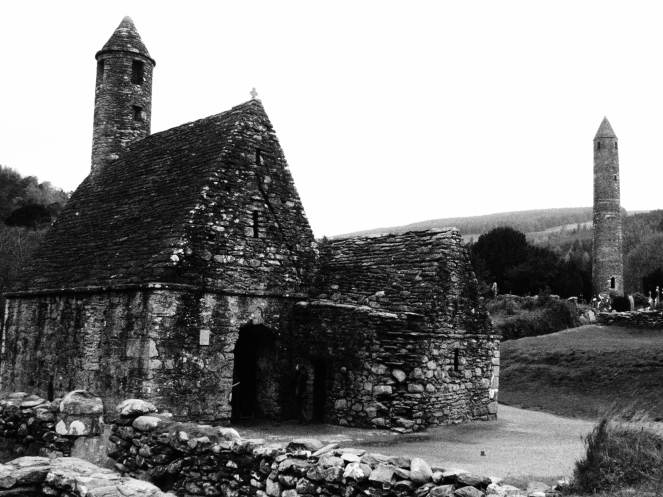 Glendalough, meaning ‘Valley of the Two Lakes’, is a medieval monastic settlement founded in the 6th century by St. Kevin. Originally the settlement was much larger, and included workshops, a scriptorium, guest houses, an infirmary, farm buildings, and dwellings for both the monks and a large lay population.  Only a few of the stone buildings remain – the intact round tower, and the ruins of the cathedral being the most impressive.  There is also a building called St. Kevin’s Church, or “Kitchen”, because people believed that the bell tower was a chimney to a kitchen, but really, no food was ever cooked there. 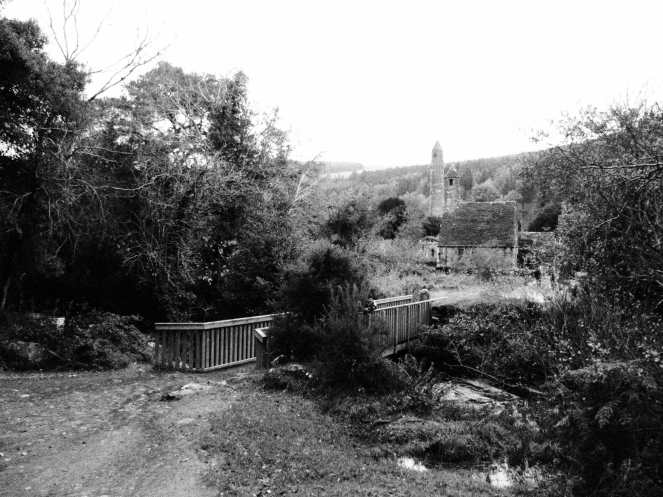 Our kids love a good ruin and ran through the site playing their complicated spying games.  Hopefully those Italian tourists they chose to conduct their espionage operation on didn’t mind their less-than-subtle observation of them.

After our visit to the site we had a quick walk along the lake, but the rain had had starting and the light was already fading…