After leaving Zakynthos we flew to Berlin via Athens.  Not the quickest way to go but the cheapest option we found at the time.  We flew with Aegean Airlines who were surprisingly good with 23kg of luggage and meal included. We’d chosen to stay in a small pension-hotel in Charlottenburg- Wilmersdorf because of its excellent TripAdvisor reviews, its decent price, and the fact that it was a single bus ride from Berlin Tegel airport.  The ease of getting to your hotel via public transport is always something I take into account, as our kids are too small to be able to lift their own luggage up and downs stairs or on and off trains and buses. Hotel-Pension Bregenz was on the fourth floor of a six-storey building on a quiet street just near Olivaer Platz, south of Kufurstendamm.

We took it pretty easy and spent quite a bit of time just wandering about. Some of our favourite experiences were: 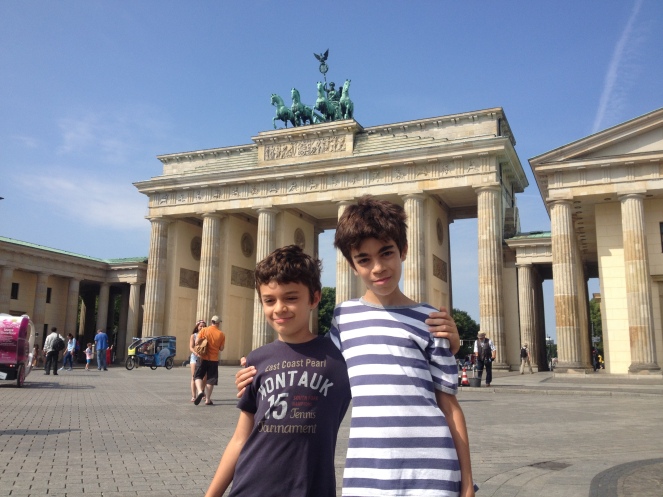 Of course everyone goes there and it’s a must see of any visit, so it’s a bit of a tourist scrum, but all the same it was good to be there and experience such an important historic site. Unfortunately, the elegant street leading to it, Unter den Linden, was a bit of a mess; it seemed to be be in the process of being dug up for the construction of a new U-bahn line.

Just a few blocks from the Brandenburg Gate is a haunting memorial to the murdered Jews of Europe. It is a series of rectangular stellae on an undulating slope of varying height.  As we approached it the blocks were knee-high but as we got deeper into the monument they towered over us creating a maze-like effect. While there are of course other museums dedicated to the World Wars and the Holocaust, the children were a bit young for those so we chose this as a suitable experience.

Children being children, they listened to the story of the Holocaust, were suitably subdued for a few minutes, then quickly realized that the memorial makes for an amazing hide and seek venue.

Our kids fell in love with the charming Ampelmann – the traffic light man. Much more debonair that the boring fellow we’re used to in Brisbane, Ampelmann was created in east Berlin but almost disappeared after unification until being rediscovered and popularised.  Now he appears on many traffic lights both in east and west Berlin and even has his own chain of stores.

Through the Couchsurfing website we met a family in Potsdam who invited us to visit them there.  We had a lovely morning at their house, then were taken through the gardens on a walk.   It was wonderful to meet some locals and get an insider’s account of life there.  When we parted ways we continued up through the gardens, past the palaces and follies, toward Sans Souci.

We didn’t enter the palace as it was terrifyingly expensive and anyway, we’d had our fix of palaces in Vienna.  However, it was free to wander around the beautiful stepped gardens and admire the fountains and statues.

Due to our limited budget and our kids’ limited attention spans we could only visit one museum while in Berlin: we chose the Pergamon.  We’ve struggled to hold the boys’ attention in art galleries but when it comes to reconstructions of ancient cities they’re hooked.  They walked around the museum constantly telling us “I’m going to build this is Minecraft”.

I was pretty impressed myself.  Even though part of the museum was closed due to renovation the artifacts still on display were definitely worth the visit.  The Gate of Miletus and the Ishtar Gate from Babylon were sublime.

Another family favourite was the Berlin Wall Memorial at Bernauer Strasse.  It’s a park extending along 1.4 kilometers of the former border strip.  There are information boards lining the route explaining the development of the wall and how it affected the locals. Interestingly, the paths of the frequent escape attempts were marked out on the ground, too.

Towards the end of the park the memorial contains the last piece of the Wall, with the preserved grounds behind it, so you can see what the border security was like. Across the road is the Documentation Centre exhibition, dedicated to the history of Berlin’s division. It explains the political and historical situation that led to the Wall’s construction, its fall, and the reunification of Germany. There was also a moving video of the 1989 fall of the Wall, which we watched a couple of times.

Berlin is a great city to visit with kids who are interested in history – palaces, WWII, ancient cities and the wall.  Add to that a lovely green city with lots of free attractions and reasonably priced restaurants and you’ve got the perfect family city break.