The book about Zakynthos is coming along nicely, if slowly. I’m up to 12,500 words. That’s still much less than I wrote for my Malaysia Diary, though. However, following advice I got on the Google+ Travel Writers community, I’ve downloaded Scrivener, a program specifically designed to help you write a book. I wasn’t convinced that Word was the answer, nor Google Docs, which I’d been using up to now. Scrivener‘s a cool word. I came across a while ago it doing Irish on Memrise; the Irish for writer is scríbhneoir, pronounced skreev-nore, more or less, so they suggested using this old English word as a way to remember it, since they’re obviously cognates.

Anyway, one of the reasons we came to Zante as early as April was to spend Easter here, something we’ve never done. We never spend Easter anywhere, really; other than having a very big meal at Tina’s parents’ house, Easter usually just goes by unremarked, like passing an internet celebrity in the street. Anyway, as you might have guessed, Easter is big in Greece. Although Easter itself is called Πάσχα, Páscha, the week leading up to Easter, Holy Week, is called Μεγάλη Βδομάδα here, literally Big Week. It’s certainly bigger than Christmas. 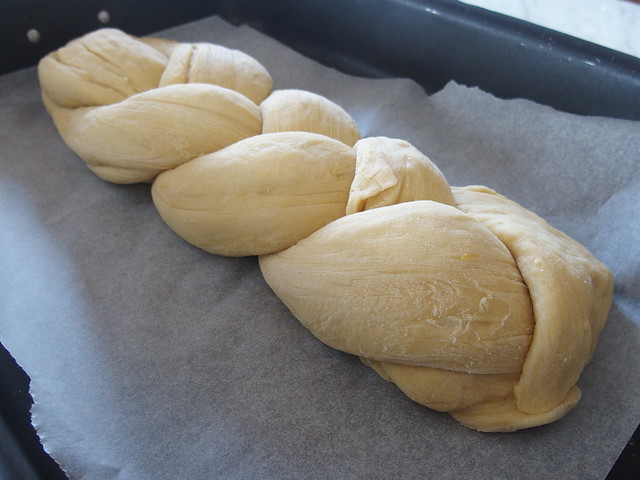 Tsoureki, ready for the oven

There’s a fair bit of cooking to be done, a fair bit now. But not by me, so I’ll skip that bit. Only joking; all the food preparation is a large part of the Easter ritual of course, so on Holy Thursday – that’s the day before Good Friday, you atheists – Tina made tsoureki (bread), koulouria (biscuits), and painted a clutch of hard-boiled eggs red for some reason. Like salmon doing their thing in the river, or insects doing whatever it is they do with a leaf or something, Greek women follow a centuries-old instinct around Easter time they themselves are barely aware of, but from which nonetheless issues forth all these cakes of delicious sweet bread, and tons of red, hard-boiled eggs. My contribution had been to go outside and pick up a lemon that had fallen under the clothes line, grate it to the tune of a quarter-teaspoonful, and beat some eggs (not the ones to be painted red). Easy.

Traffic was a bitch in Zakynthos town on Good Friday, but we found a place  near the agorá, the public market, down by the south pier, a spot that didn’t look like we’d end up being double-parked in. I swear, they’ll double-park you in as quick as look at you, the Zakynthians, even in Big Week, when you’d imagine they’d be better than that. We’d come into town for the Megáli Paraskévi Mesiméri, the Easter Friday Parade, billed as the climax of Easter Week. Corfu is the team to beat when it comes to the Heptanese Easter league: the parade in Zakynthos is small bíra in comparison, which is just as well, since Alexandrou Roma, the fashionable boutique and cafe strip in the heart of town, is narrow. In an unexpected display of coordinated traffic management, though, they had actually cleared it of parked cars, so we took our place and waited. 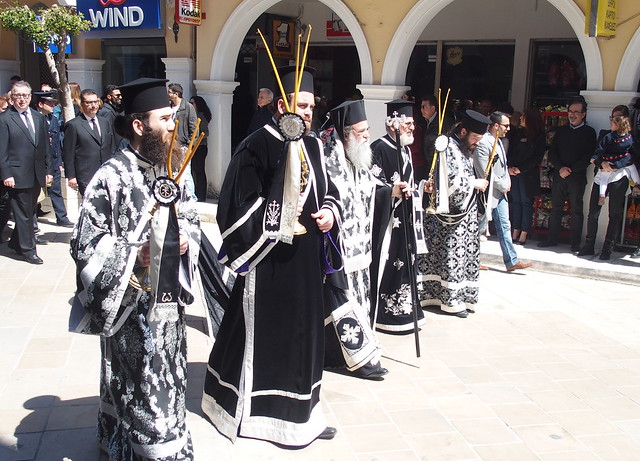 The march along the marble pavers was unexpectedly sombre. “Well, they are in mourning, after all”, Tina reminded me. “It was two thousand years ago. Can’t they let it go?” In ascending order of seniority, rows of marchers, some reluctantly pressed into service, surely, others more willing, shuffled past: little’uns, young school kids, cub scouts, teenagers, and the main event, the black-clad priests with ZZ Top facial stylings, some of them in what looked like black and white kimonos. It was mercifully succinct as far as parades go; before we knew it we were watching the tail of the parade recede south and the crowd was closing in around us, like waves no longer parted. “Coffee, anyone?” Nothing beats a café elleniká down by the waterfront on Easter Friday after a good parade, watching families drift past us, the kids all dressed up, the women all made up (they always are, actually), and the men in need of a shave (ditto).

We were welcomed into the small family courtyard in the village of Pantokratoras. Kalimera sas! We’d scored an invite to a Easter Sunday family lunch, courtesy of Yorgo, a longstanding friend of the family, which was a like winning a lottery ticket as far as I was concerned, interested as I was in getting writing material. And meeting Greek people just for the sake of it too, of course.

The epicentre of the action was a young goat rotating on a motorised spit over a rusting half-cylinder drum. You’ve goat to be kidding, I thought. I watched, disgusted and fascinated, as Yorgo and his sympétheros Panayioti (Yorgo’s daughter is married to Panayioti’s son), who was the paterfamilias of this compound, prodded it, picked at it, and swept it with a bay leaf stick from time to time. We were reassured to be told that the victim wasn’t in fact one of the party of goats we’d seen last night, being led by Yorgo across the road. “Όχι, όχι! It was one of the κατσίκιs. Four months old.” 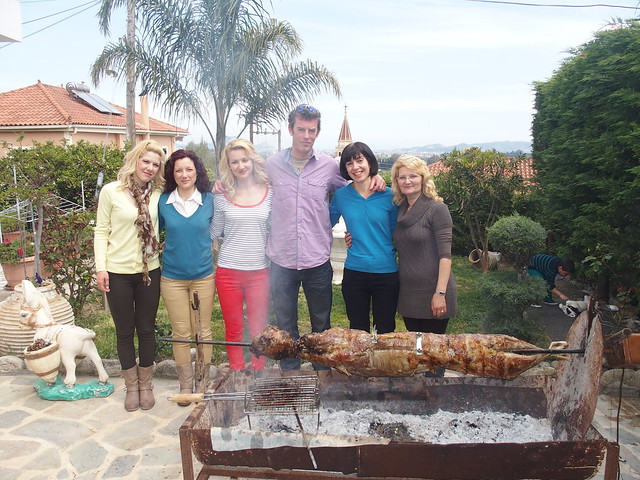 After four hours, one for every month of the wretched creature’s life, the katsíki was ready. At the table there was chiromeri (Zakinthian prosciutto), tzadziki, feta, salad, of course, tons of it. There was a plate of the locally-made cheese we love, called dópio, which simply means local. Plates of rough, torn-off goat were placed in front of us. Steak too, for good measure. I cut some katsíki up for the kids, but Panayioti had been watching the proceedings keenly and knew damn well that I was ducking the goat myself. “Have some goat!” It was both an invitation and an order, but much more the latter. These men speak in exclamation marks, at least when it comes to food.
“I don’t want any.”
“Γιατí;”
“I don’t really like meat that much.”
I hadn’t really intended coming out of the meat closet today, but that’s big family meals for you. My shocking admission was never going to just sit there, unannotated. The exchange had too much emotional momentum to just stop on a sixpence (or a 5-cent piece), so Panayioti turned to report it to the guy sitting beside him tucking into the kotópita, who clearly gave 4% of a crap about what I ate.
“Get this guy! Doesn’t like meat!” I imagined he was saying.
“Πω, πω!” Po-po!

All this, and we even went to Midnight Mass too. I’m glad we were here for Easter in Zaknthos, but to be honest I’m relieved it’s over. Now to write about it.

One thought on “Easter in Zakynthos”