I’m finally here in Zante, the travelling bit is over for the time being, and it’s time to bang out the words.

“A Season in Zakynthos”

As a title for the book I’m thinking of “A Season in Zakynthos”, which admittedly is derivative of “A Year in Provence”, which itself can’t be the first time someone thought to use A Unit of Time in Such-and-Such a Place as the format for a title of a book. I want the name of the island – Zakynthos – somewhere in there. Think of “Under a Tuscan Sun” as an evocative title. But then again, every book has a subtitle nowadays, so I might restrict it (Zakynthos) to the subtitle, and instead call the book  “Koukla House: A Season in Zakynthos”. Although it’d be nice to get Zante in there too. I think it’s a nice, bouncy, Santy Clause kind of a word; too good to waste. So maybe “The Zante Cause: A Season in Zakynthos”? I need a reader, like this guy I saw in Budapest

But first I have a few questions for Pat, my Californian writing mentor. Because it’s not like you can just sit down and write a book you know. For a start, what, if any, special software do you use to write a book?

“I wouldn’t worry about software. As far as I know nobody uses anything special to write books. Just write. And then rewrite.”

Yeah, but how do you know that what you’ve written makes any sense? I mean, I can write about something I know a little bit about, like this island I’m on, without having explained enough about it to the reader, who may well know nothing about it. It’s what Steven Pinker calls the curse of knowledge in The Sense of Style, a book I’ve read twice so far in preparation for writing my own. For example, the township Koukla House is in is called Porto Koukla, which is in the village of Lithakia, which is on the island of Zakynthos, also called Zante, which is an island in Greece. Some people may know all of these things, some none. When writing, I might use Lithakia as a proxy for Zakynthos just for the sake of variety, and other times I’ll use Zante as an alternate term for Zakynthos, again for no good reason. In any case, the different terms are not always so starkly distinguishable; they may really just mean the same thing. How will people know what I mean?, he fretted, tediously.

“Find people to read what you’ve written. Might have to pay them. You can get friends and family, but its hard to get commercial feedback otherwise.” 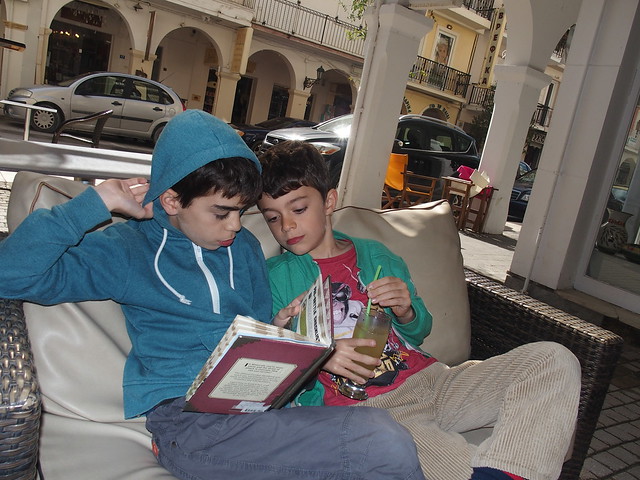 That’s interesting: I didn’t know there were professional readers. I cant afford to pay someone to read my stuff, though. My dear ol’ Mum, who’s arriving here at the end of May and staying for two weeks, is going to be the only one I can think of that I can rely on to help with the reading. Tina herself will be too familiar with the stuff to be a decent arbiter of its quality, and her parents wouldn’t be up to reading that much English. I might have to email my friends, but I’m loathe to do that, as it seems unfair to bother people who have to work for a living with my holiday book anxieties.

Another thing: if you’re writing about a place, you obviously want to write about the people you meet. You’ll want to flesh them out as people, which might involve saying something interesting about them, the sort of thing that might upset them if they ever read it, not because it was untrue, but because, well, anyone reading about themselves might not like what they read. To get around that problem, I thought of having composite characters. What’s the deal with that, in travel writing? Or is it a no-no? Do the characters absοlutely have to be real ones?

“I’d say you’ll get in trouble with composite characters.  You’d need to be writing fiction at that point.”

Ok, fair enough. It felt like a cop-out anyway. I’ll allow the better angels of my nature to guide my writing. I still have loads of questions, though.”

“Well, I’d say go ahead and write and see where it goes. All the planning should go out the window and the book/story will take over. At least that’s what one hopes. Takes on a life of its own. Or some minor character will take over. Start leading you around. In any case you can’t publish ideas. So get that arse in a chair and pen to paper…”