We arrived in Zakynthos by the front door, at the beginning of April, the end of orange season. To fly in, as we sometimes do, is to skulk in through the servants’ entrance. We sailed into Zakynthos harbour this time like pirates, boots up on the gunwale, telescopes out.

We’d flown into Greece the night before on the first Ryanair flight of the season from Budapest to Athens; in fact, I think it was their first ever flight between those two cities. Arriving just before midnight, I felt the excitement of seeing the first words in Greek after a month of German. There it is: πληροφοριές is such a beautiful word. It means information, and you say it like this: plee-ro-for-EE-es. We strolled anticlimactically through the έξοδος into the arrivals area. No-one was there to welcome us. I never know if it means I’m secretly unhappy that I always imagine, however remote the likelihood, that a friend or family member is there waiting for me. 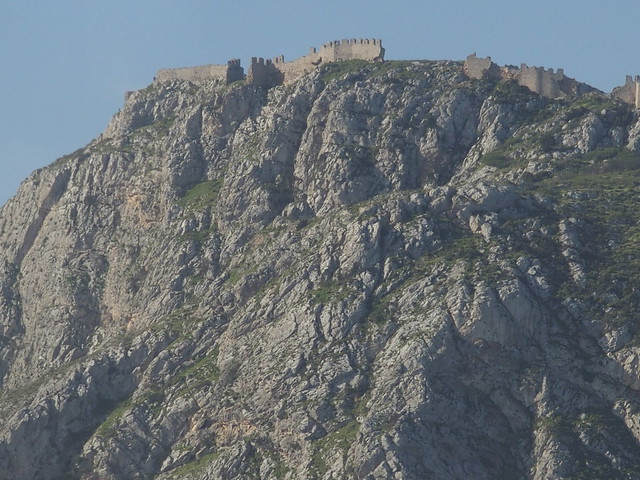 Acrocorinth, near the city of Corinth

Even though it was nearly midnight, I considered Athens International Airport an old friend, so I wasn’t dreading the prospect of crashing on the couch for the night. In the event I ended up enjoying the piped classical music, and took advantage of the friendliness of the café women with whom I was able to ease myself back into Greek. Workhorse words like παρακαλώ (please/you’re welcome), εντάξη (okay), and above all ευχαριστώ (thanks) were coming back to me slowly. Eventually, though, we all ended up sprawled on a café bench until just before first light, when the first bus would left for the KTEL Kifisou bus station on the outskirts of Athens, from where the coach to Κυλλήνη (Kyllini) would leave, and from where in turn we would get the ferry to Zakynthos.

On the bus from the airport, clattering noisily away from the fast dawning light over our shoulder, I recognised some of the airport staff I’d seen over the last few hours. Like the friendly Eurochange guy with the beard who’d given me four euros for my leftover Hungarian forints six hours earlier. He hadn’t been able to take the change, naturally, so I’d divvied the coins up between the the boys. They each got a king’s ransom of 565 forints. It felt strange listening to the airport staff nattering away, happy to be finished up for the night and on their way home to the suburbs, when we still had a canal, a country, and a sea to cross. Ours was the terminus stop; I watched them all get out until we were the last ones on the bus.
“Γεια σας.”
“Γεια σου. Να ‘σαι καλά.” 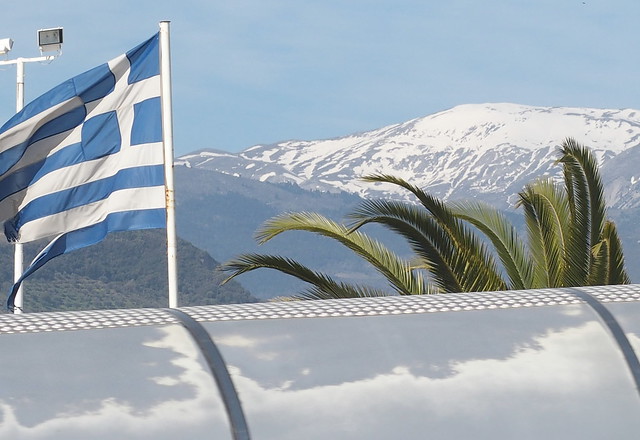 I had a quick coffee to cure the tiredness, my sixth in twenty-four hours, and with chocolate for the road and everyone’s horses watered, we left for Kyllini at 8 on the coach. I’ve done this trip a few times: my only worry is that I might get stuck close to someone fiddling with their κομπολόι for the whole trip, like I once did on the road to Nafplio. Playing with worry beads is a signature Greek custom, but in a bus beads are just a noisy liability.

Cameras came out when we crossed the useless canal at Κόρινθος, Corinth. I preferred the spectacular Acrocorinth, which I knew nothing about, but which I liked the look of. The next hour saw us plough on at a decent pace along the Corinthian Gulf, with a barrier of mountains on the northern side, and smaller ones, though with plenty of snow, on this side. We’ve driven along that north coast once, on a trip to visit the oracle at Delphi, when Alexander was just a tot. The bridge you use to cross the gulf is the expensive (it was €10 ten years ago), 3-km long Rio-Antirrio bridge. Rio is the town on the south, and opposite Rio is Antirrio; αντί is often used in Greek to mean opposite. You might have heard of the Antikythera Mechanism, the ancient planetarium found off Antikythera, which is near – you could say opposite – Kythera. 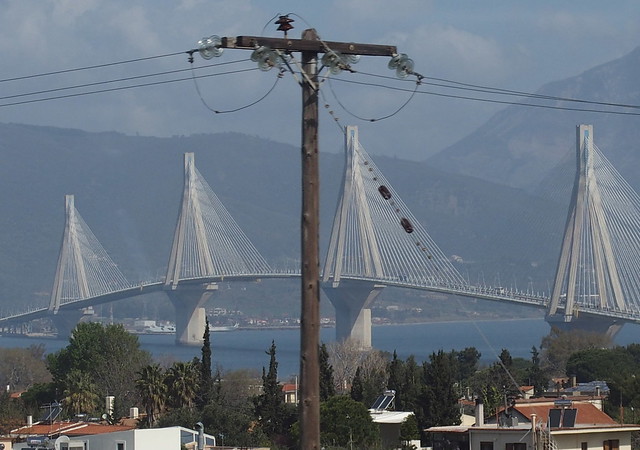 Kyllini’s a bit like Holyhead, the ferry terminal to Ireland in Wales; somewhere you end up whiling away precious holiday hours, oscillating between giddy excitement and crushing boredom, and wondering out loud what the people who live there do. Drugs, I suppose. It also sounds, even down to the emphasis, like Killiney, the seaside suburb in Dublin where I grew up, so it’s a word I’d warm to even if it wasn’t the name of the jumping off point to Zante.

There’s a new, yellow ferry, called Fior di Levante, which has only been running since November ‘14, much too recently for us to have seen it before. With its prominent phone number on the side, it looks like something Ryanair would be proud of. But inside it’s more Aer Lingus (if that’s the right contrast to make). You’re whisked upstairs in an escalator: none of the usual lurching up a steep iron staircase; the stuff, admittedly, of authentic maritime travel. Incidentally, Fior di Levante is Italian for Flower of the Levant, Levant being a fancy word for east, all of which is the poetic name given long ago to Zakynthos by the Venetians. 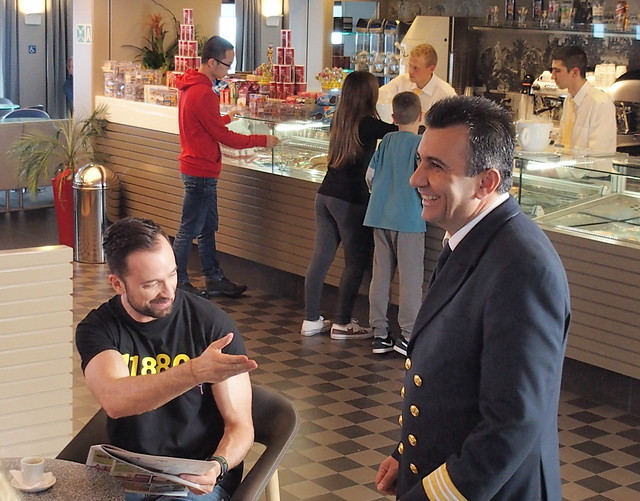 On the Fior di Levante

Emboldened by my imminent return to Zakynthos, and the ease with which I’d slipped back into Greek so far, I went up to one of the three Chinese-looking young guys sitting near us on the Fior, co-passengers on the coach who had travelled all the way with us from Athens this morning. I thought I’d get a free language lesson, while at the same time finding out their story; unsurprisingly, you don’t see too many Asians on Zakynthos.
“Ahem…你们是中国人吗？” (Are you Chinese?)
“Sprechen Sie Deutsch?”
“Ah what the fuck, like?”
The three lads were studying civil engineering in Germany, and were originally from 广东, Guangdong, China. No, I hadn’t been there, but I knew where it was, near Hong Kong. You can see one of them in the photo above, in red, at the bar. They were only going to be on Zante a couple of days, and were mainly concerned with seeing Ναυάγιο, Shipwreck Beach.

We were lucky enough to get a bit of local artsiness on the way over: a film crew was shooting an ad for the new ferry while we were on board. I got a few photos of some famous singer (on the left in the photo above) being asked, about forty times, whether the coffee was to his liking by the captain. It made for an entertaining crossing of Πορθμός Ζακύνθου, Zakynthos Strait, but when the familiar cliffs overlooking Zakynthos town hove into view through the windows, it was time to go up on deck, and pay attention to our arrival.

Dionysios Solomos church. Bohali. Further up, the Castro di Zante. Skopos mountain. All the beloved landmarks, finally, right there. It had been a long trip. The front door was wide open; it was time to go in.

One thought on “Athens to Zakynthos, via the Peloponnese”