I’ve been watching Viennese people. They probably think that, as a tourist, I’m looking at the Hofburg Imperial Palace or Schloss Schönbrunn, but I’m looking at them. What’s more, I take photographs of them surreptitiously. In my defense, if I didn’t use subterfuge it wouldn’t really be possible at all. Es ist meine Lieblingsbeschäftigung, my favorite activity.

Unlike many people, whose idea of a good time is to stand in front of a world-famous monument, take a photograph, perversely, making themselves the subject instead of the thing itself, I’m just not that interested in photographing myself. And the opposite’s true as well: unlike a lot of people, who don’t seem to be interested in photographing anyone other than their friends or family, I’m only really in the zone with my camera when I’m trying to photograph total strangers; people in the street, other tourists at the museum, or locals just sitting and minding their own business in the same café as me. 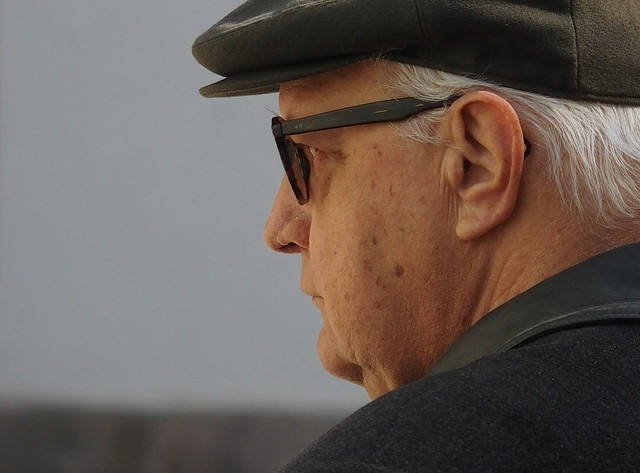 Take this old guy, for example. On a Sunday morning recently, having climbed the 343 steps of Stephansdom Südturm, the south tower of St. Stephan’s Cathedral, we found ourselves at a tiny square on a street called Lugeck just north of Steffl (as St. Stephan’s is known locally). I was struggling to frame a decent composition using a statue of Gutenberg, I think it was, but statues, like animals and children, are hard to work with. I noticed this old man sitting on a bench facing ninety degrees away from us, letting his eyes rest on the expensive shopfronts across the road. Manoeuvring a blank wall behind him as a background, unbeknownst to him I took his picture.

In this photo I obviously had no interaction with the subject, the old guy. In the first place I didn’t want to disturb him. But my reticence was as much for the sake of the photo too: had I approached him and asked could I take his photo, and had I got the nod on that, would I have got the photo I wanted now he was conscious of what I was doing? Hardly. The reason I wanted the picture in the first place was because he was oblivious to me, and looked busy attending to a lifetime’s worth of memories, which showed on his face, or so I hoped. 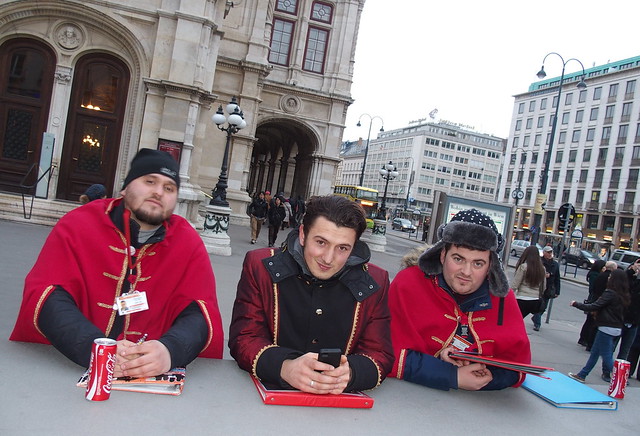 In this photo, on the other hand, I went up and asked some of the robed-up ticket touts you see hanging around outside the Staatsoper could I take their photo. It’s easy to approach people who are dressed up in some way. Especially if they’re standing outside a world famous opera hall attracting attention to themselves, although in this case they seemed to be on a smoke break. Anyway, they were fine with it, although for some reason they didn’t like the idea that I’d be putting photos on Flickr.
“We don’t like social media.”
“Why not?”
“Anyone can see the picture.”
“That’s the idea!”
They gave me their card. “Vienna Visitor Service”; quite enigmatic. If I didn’t know what they did, that could mean anything. They – well, the guy in the middle – spoke with what to my ears sounded like a Russian accent. But since I know nothing about the babel of tongues east of here, it could just as well have been Slovakian, Belorussian, or Ukrainian they were talking. And they didn’t really care about Flickr, or I wouldn’t have persisted. You can tell when people are genuinely not into having their photos taken, and when they’re just messing with you. With these guys, it was a case of the latter. The Fiaker guys outside Steffl, the guys lined up with the horse-drawn carriages, well, they were tougher nuts to crack, so I just got my picture and didn’t stick around for a chat. Not that they are all like that, mind. Some carriage guys have been friendly, nodding at us and the kids as we walk past. But the guys I happened to disturb during their morning chat the other day weren’t into it, so I respected that. I’m still going to put their picture on Flickr though, if I’m happy with the picture.

Long ago, as part of a photography course I once did in Dublin, we covered the legality of photographing people in public. Basically, it’s game on for photographers. If you’re in the street, even if you’re minding your own business, you’re mine, bitch. Not everyone understands that. I once got pulled over by a flic in Paris for sneakily taking people’s pictures as I walked by them. I didn’t feel like getting into it with a cop, obviously, but I couldn’t see what was so wrong. They’re in public, in the street. How else can you get candid, documentary-type street scenes? Think of the sort that Doisneau and Cartier-Bresson did, the sort they sell as posters, the sort which strongly suggest that Paris is where you go to kiss photogenically on the Rue de Rivoli? And that run-in with the Parisian policeman was over twenty years ago. Cameras are everywhere now, even on things that aren’t cameras, like phones and tablets. 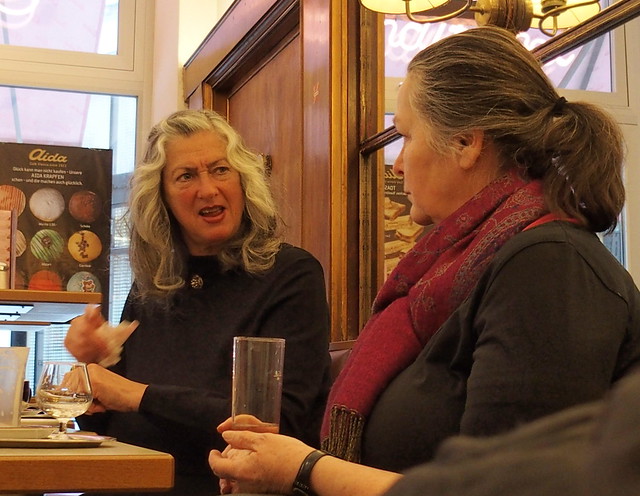 There clearly should be some rules of engagement though: thou shalt not misrepresent what’s happening by cropping a vital part of the picture (another person, for example). Same with Photoshop alterations. I can’t see why you’d do that anyway if you’re just a travel blogger like me documenting a place you visited. Also, try not to make people look bad. It’s easy to get a dramatic expression on someone’s face by waiting for them to yawn, or grimace, but it’s not fair to make someone artificially look silly; and again, it wouldn’t be true to what they were doing, so abstain.

I took this picture of these two women in one of the famous, and very pink, Aida cafés in the centre of Vienna. Completely destroyed during the war, the chain was rebuilt again afterwards. They have a ‘70s feel, and the women (it only seems to be women) all wear the same pink dresses, sometimes with a slip showing for some reason; it must be part of the uniform. Anyway, the woman on the left here was quite animated during the conversation they were having while we sat near them, as animated as her companion was impassive. Not that there was any rancour between them, but I don’t think the woman on the right said a single word. We tucked into our Einspänners and Apfelstrudel. When she’d gotten it all off her chest, the garrulous woman and her silent partner put their coats back on and went out into the cold. They hadn’t noticed me at all. 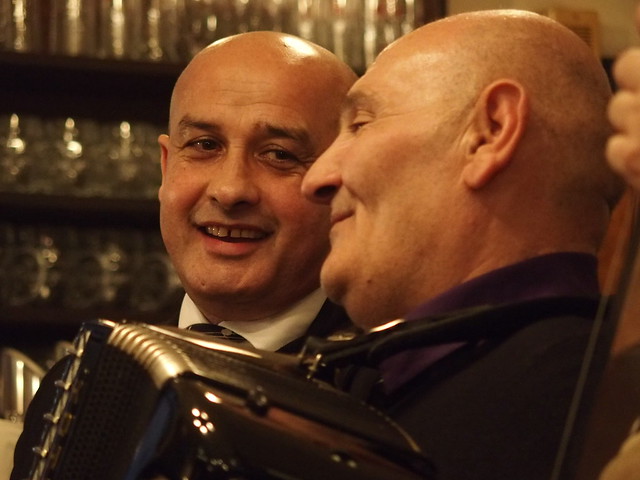 And then there are the pictures you pay for. With cash I mean, not karma. We went down to the Naschmarkt one night, traipsing around all peckish, tempted at every food stall, of course, but unwilling to give in and blow the day’s budget. We were about to call it a night and go back to the Karlsplatz U-bahn station when we came upon this tiny, homely Gasthof with what sounded like traditional Austrian music coming from inside. Not that I know the first thing about Austrian music really, I simply assumed that the middle-aged (and upwards) guys dressed up and playing violin, accordion, and double bass hadn’t flown in from the Andes. Now this was what we wanted: quaint and cosy, with a free table to boot. To think I had seriously thought about the Thai joint we’d passed two minutes earlier.

With our bums on a pew, and our food on the way, we soaked up the music und die Atmosphäre. And while the musicians rocked the joint, I got off a few photos, which wasn’t too easy what with the low light. This one here was the best one of the lot, showing as it does the fun and pleasure you have playing music, something I miss in my life, which I used to have back in my heyday in Connemara in the late ’90s. We used to do a weekly session called Baskethouse, named after the basket we’d pass around for tips during a break. When the Naschmarkt Gasthof Musiker (musicians) eventually took a break and went around with the cap, I was happy to chip in, knowing I’d got my shot as well as enjoyed their music.

Check out my Flickr set, “Wieners“, for the rest of the photos.