You’re allowed do 130 km/h on the Autobahn here in Austria. Which means of course that you do 140, like everyone else. And occasionally, when no-one’s looking, you might chance 150. Which puts the Danube Valley less than an hour from Vienna.

The Danube looms large for tourists visiting Austria, in the sense that you’re going to want to see it at some stage, and in a decent setting. Certainly it’s there in Vienna itself, in all its four-pronged glory, but the graffiti-walled Danube Canal in Wien Stadtzentrum, the centre of Vienna, is not exactly what most people think of when they think of Strauss’s Blue Danube. So how do you see and appreciate such a force of nature? How do you get good photos of the Danube? 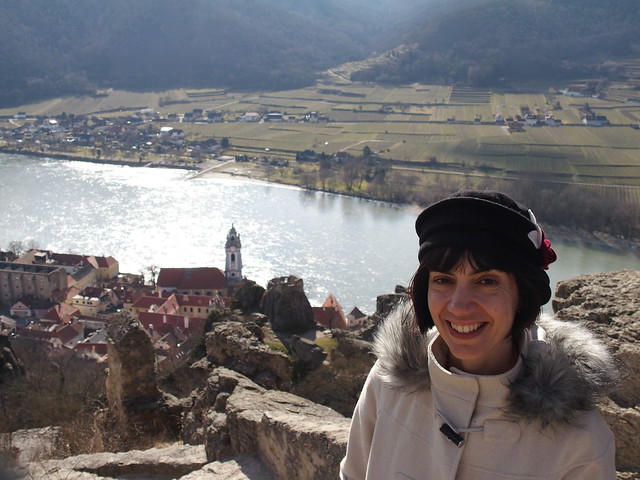 We rented a car for the day and drove out to the Wachau (that’s what you say, just “the Wachau”), a UNESCO World Heritage site to the west of Wien. When the great river finally leaves Austria for Slovakia, bound ultimately for the Black Sea, it does so in an hour-long commute eastwards out of Vienna, but the real magic happens on the western side an hour before the capital. As if carved from the landscape by the Austrian tourism board to make life easier for tourists like us, the stretch of the Danube Valley called the Wachau, between Krems and Melk (‘cream and milk’; well, it helps me remember them), packs big visual appeal into its compact thirty or so kilometres. As you look at the Wachau on the map, Melk is at the bottom left, and that’s where we started.

The tour of Stift Melk (Melk Abbey) didn’t do much for me, but Tina likes a good Benedictine abbey so she enjoyed it, although I guess I’m glad now that I did it, cold as it was. We heard a fair amount of stuff about the monks and the centuries-long orgy of dreariness they must have lived, punctuated only by the thrill of prayer and periodical fires. But there were two strange things, two technological innovations, that stuck in my mind from the guided tour we took. At one stage in the last few hundred years, apparently, one of the Habsburg rulers came up with the startlingly modern idea of a reusable coffin, one whose bottom panel opens like a bomb hatch as it’s being lowered into the ground, releasing its cadaverous payload into the grave, freeing it up for the next stiff. So the advice given to the terminally ill was: don’t get too comfortable in there, you’re just passing through.

The church at Stift Melk

As for the second thing that impressed me: well, here’s a conundrum. If you had an impressive marble hall with frescos aplenty and all the usual Baroque accoutrements, such as the the abbey’s Marmorsaal (Marble Hall) has, but wanted to make it more spacious, how would you do that without raising the roof or lowering the ceiling? The Benedictines commissioned Paul Troger to create some ceiling trompe l’oeil frescos, which deceive, indeed trompe, you into thinking the roof is higher than it actually is. Tada! It’s an effective trick when you’re standing in the middle of the hall looking straight up, but it kind of breaks down when you’re at either end of the room, from which perspective the roof looks like it’s had too much to drink. But when it works it really works, so I’m thinking of getting it done in my front room at home in Brisbane, only with possums and galahs instead of the Marmorsaal’s Gods and plump cherubs, which frankly would come off as ridiculous in the suburbs.

They say you travel to discover yourself, and in so doing perchance to change. I will never again associate abbeys with impecunity and asceticism, certainly not after experiencing the interior of the Stift Melk Baroque church. Rather, I will associate them with Liberace-level sumptuousness. I was going to say the church was the jewel in Stift Melk’s crown, but I don’t think that would do it justice. It is, simply put, ridiculous. It is more over-the-top than soldiers were at the Somme. I don’t care where you‘ve been – you’ve never seen anything like the interior of this church. It’s now open to members of the public for normal mass services, unlike when the abbey was a working abbey, so if you find yourself in the cobblestoned gem that is Melk town, well, atheist that I am, I still advise you to attend mass.

Jumping into the Wachau then, we crossed the Danube to Emmersdorf and turned north. Schloss Schönbühel suddenly revealed itself on the opposite bank, where we’d just come from; it had, of course, been totally eclipsed by the hulking Stift Melk while we were all on the same bank. Excited by the welcome appearance of the iconic castle on the cover of our ‘Lonely Planet Austria’, we knew we were where we wanted to be. This was the Austria we came to see. 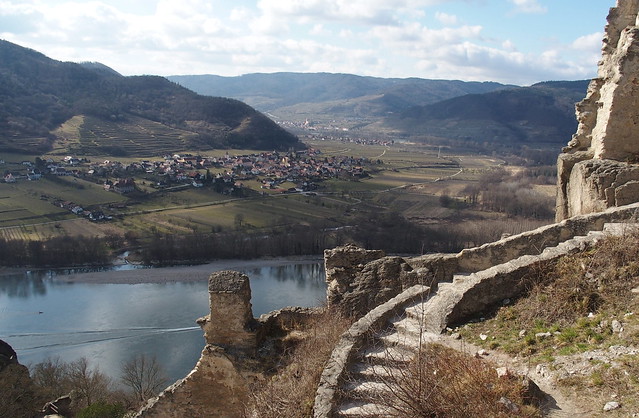 Ah, it’s a lovely drive north to Dürnstein, the next stop on our itinerary, where sits atop the hill overlooking the town the ruins of a castle called Kuenringerburg. But it’s cold outside: how do you sell a steep climb to two kids comfortably ensconced in the back seat of a warm car? Tell them about Richard the Lionheart, about how he was caught secretly trying to cross Austria by the bad guys, and stuck in a dungeon on top of a mountain like the guy in The Count of Monte Cristo, which they’ve seen. Then flesh the story out with the bit about how Blondel the minstrel found his missing, and beloved, king, Richard, in one of Dürnstein’s inns when, striking up a ballad, he heard a voice join in which he recognised immediately. That must have been before the part where they caught him and slapped him in irons, of course.

Kids love stories, so that did it. Up we climbed, to be rewarded half an hour later with a great view of the riverine landscape. To behold a bend in any river from on high is a big moment in anyone’s day; if the river is the Danube, and your vista is framed by the Bergruine (ruins) of Kuenringerburg: that’s a holiday highlight right there. The ruins are still intact enough to appreciate viscerally how especially miserable it must have been to be shackled up there on the hill, as the bitter cold whipped through your cell carrying the scent of the vine terraces, able to smell but not see the mighty Donau.

For every ointment there must be a fly. In Krems, for a well-deserved Einspänner coffee in a café in the Altstadt, we came back to the car to find out we had a twenty-euro parking ticket. Indifferent to our misfortune, we took off like scofflaws to chase the day’s dying light and get a last look at the Wachau and its castles. Schloss Schönbühel, seen earlier from across the river, was the target, and time was running out if we wanted to get a photo. 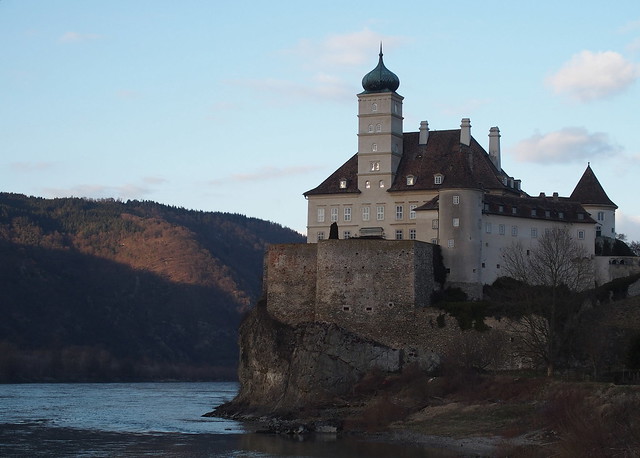 Schloss Schönbühel in the fading light

We didn’t quite make it. By the time we got there it was slightly too late. Well actually, you can judge for yourself – I may just have salvaged a half-decent picture from the dusk, but I’d have prefered to have gotten there earlier. There was no question of having a tour of the castle even if we wanted one: we were the only people around, and it looked shut up and dead. That was ok since I was only interested in getting ‘the photo’ of Schönbühel, the one taken from underneath the tree on the cover of our book, like I mentioned earlier.

So the keyword here is ‘Wachau’ if you’re staying in Vienna and want to see the Danube. There are so many castles here, you stop looking them up. And so many photo opportunities, but just not enough light in March, alas. We finished up for the day with me walking hurriedly along a rocky, unattractive river bank in pursuit of some photographic sweet spot from where I’d turn and face Schönbühel castle and get a shot I’d be happy with, all the while running out of light, fast. Tina and the lads, meanwhile, we’re under no such pressure, and were happy to gaze out at the valley on the far side of the river in the fading light, and at the castle on this side that was nearly a thousand years old.

3 thoughts on “The Wachau, Danube Valley”