Before landing in Koukla House, Greece, to start writing our book (that’s ‘The Zakynthos Project’) we’re spending a chilly month in Austria as Help Exchange guests with a family from Donaustadt, just outside Wien (Vienna).

We’re settling in nicely in our Viennese hosts’ house, hitting our stride by doing household jobs, helping Silvia and Pauls’ kids Phillip and Mara with their English and French Hausübung (homework), and getting up promptly and unbidden to load der Geschirrspüler (dishwasher) after everyone has finished their Apfelstrudel. (Your humble dishwasher is one of those things you learn the foreign equivalent of pretty quickly in a help exchange environment: in Spanish it’s “el lavaplatos”, “le lave-vaisselle” in French, terms I learned from our Catalonian and Toulouse helpers recently.) In the world’s tiniest garden we even did some weeding today. But there have been mistakes. We both, absent-mindedly of course, and on separate occasions, hung out a basket of their dirty laundry to dry, which we had thought was both clean and left out for us to deal with. Funny, this is a problem that never arose in the humidity of Queensland over January/December – none of our helpers ever confused dirty washing with clean. 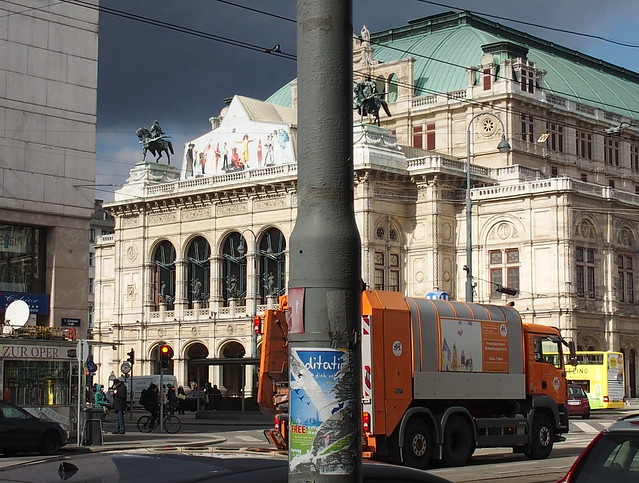 As the days pass and we see Vienna in all her glory, a question plagues me. Well, maybe ‘plagues’ is too strong, but it definitely is a question, so here it is: is the three and a half weeks I have in Austria enough time to make a decent stab at learning German? On the one hand, it wasn’t really a language I was particularly interested in before coming here, so why not just kick back, enjoy the fact that everyone here can speak English better than Stephen Fry, and leave it at that? On the other hand, I’m here after all, and I’m someone whose friends say is interested in languages, so why not make a fist of it? Entscheidungen, Entscheidungen (decisions, decisions).

We’ve been leaving the house every day at around 10 in the morning and walking the ten minutes or so to the metro. If we aren’t properly awake before we leave the house, we certainly are by the time the wind whips through us on the way to Aspernstraße station. It takes us about twenty minutes to get to the Stadtzentrum (city centre) on the U-bahn (the line we take is called U2, in homage, surely, to the Irish art-rockers), during which we skim the free Heute (Today) commuter rag you can get outside the station. If we’re lucky we’ll find a copy of Der Standard left behind on a carriage seat to read instead. Fabulous in Financial Times pink, it’s easily the best newspaper in Austria according to its website: “Der online News-Room der führenden Qualitätszeitung (highest quality) in Österreich”.

Leaving Donaustadt, the suburb we live in, northeast of Vienna itself, we always look up in homage and acknowledge the crossing of the Danube, which takes place about five minutes into our passage into Wien Stadtzentrum. Well, it’s the old Danube. You see, there are a few of them. To safeguard against its tendency to flood, for its transit of Vienna the Danube has been straightened-out like a husband caught banging the au pair. No, I mean it’s actually been straightened. On top of this, and this is where my analogy with a love cheat collapses, they also built a very long, thin island, the Donauinsel, in the middle, bifurcating the river. Nowadays the Donauinselfest (Danube Island Festival) is no less a thing than Europe’s biggest open air event. Falco played a huge gig there in ‘93, so I’m glad I missed it that year. The extra channel – stay with me – caused by the Donauisler is called Die Alte Donau (the old Danube). Then there’s the canal, which is the Danube you see flowing through the city centre. And finally, there’s the natural, oxbow lake section, orphaned by the straightening project.

Anyway, it is tricky to understand if you don’t know Vienna, so take a look at this map of Vienna to see what I’m talking about. But there’s no sign in all of this Danubular shenanigans, disappointingly, of the most famous of them all, the Blue Danube. By the time we reach Karlsplatz in central Wien about twenty minutes later, I’m fast approaching the end of the second paragraph of an article from “Der Standard”. Oh, I could read it all day, but it’s time to see the Sehenswürdigkeiten (sights)!

To get back to the question of learning German: all rhetoric and phony conflictedness aside, there was never really any doubt about whether I’d try it. I’m a glass half-full kind of guy, so of course I’ll be giving German a lash while I’m here in Austria. Besides, I’m not a complete beginner you know. In 1991, studying photography in Dublin Institute of Technology, I had to do a six-month German module, rather incongruously (for a photography course that is), taught by an attractive, short-haired, blonde German woman called Fanni. Actually, I made that last bit about her name up. What’s more, over the last couple of years I’ve been brushing up on German on Duolingo for no particular reason. 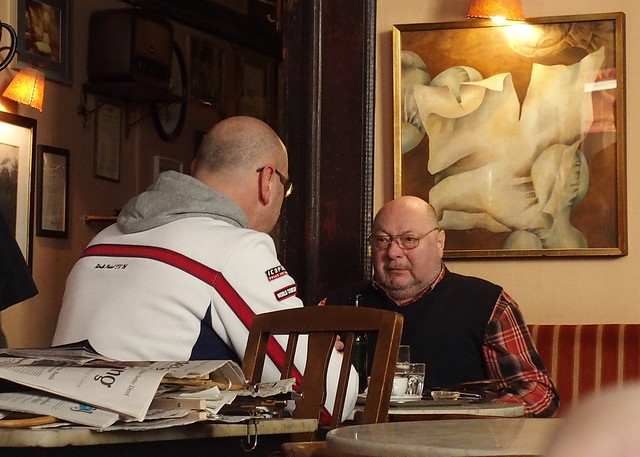 But there’s an obstacle the size of the Alps for any language learner to overcome in a German-speaking country like Austria, and I’m not talking about the dative case. It’s the one I ended up calling language cross-talking when last I was in Greece. In good faith and bad German you try speaking German to a German speaker – “Bitte, wo kann ich…er… kaufen… tickets?” – and in excellent English they’ll respond – “You can get them over there, at the ticketing office.”
“Feela…viele danke schön.”
“You’re welcome.”
(Sotto voce) “Speak German, damn it.”

But me – I’m a seasoned language learner. This isn’t my first tour of duty. I have strategies for how to get around Austrians’ intransigence. I’ll learn German off them, they’ll see.

4 thoughts on “The Four Danubes of Vienna”