Skip to content
We were sad to leave beautiful L’Avenc but also excited about our next adventure – crossing the Pyrenees into France.

The day started bright and clear as we headed north into the foothills of the Pyrenees stoping at Sant Joan de les Abadesses for lunch and  a  quick look at its famous bridge.  Then up through the mountain pass to Puigcerda and the French border.

The drive up to Puigcerda was breathtaking.  We followed the river valleys and zigzagged our way up the mountains.  Predictably there was a bit of carsickness in the back seat so we took it slow and had lots of breaks.
Once on the French side we followed the Tet river valley.  By this time the weather had set in and the valley was swathed in cloud and rain making for an atmospheric, if tricky, drive.
Our final destination was Villefranche-de-Conflent. This is a perfectly preserved town still completely within its original medieval fortifications and surrounded on three sides by rivers.  We checked into our B&B called A l’Ombre du Fort (In the Shadow of the Fort).  This lovely old house is situated just outside the town walls by a river.  On our first evening we followed a path by the river, crossed over a bridge and jumped over the (live!) train tracks to enter through a portcullis. Now, if you are Australian you really get excited about walled medieval villages overlooked by a hilltop fort.  This stuff is old – real old, not Australian old which is basically anything older than your Nanna.
The next morning we tackled the fort and decided to walk up the mountain path.  We managed to stop the kids from complaining by inventing an elaborate Minecraft scenario involving zombies who were chasing us – whatever gets them up the hill…  Fort Liberia is a perfect kids’ fort – ramparts, dungeons, lookouts with deadly sheer drops and inadequate medieval fencing – it’s got it all. After a thorough exploration we were ready to head down to the town for lunch.  We decided to take the other way down – the 775 step subterranean staircase built to safely move troops from the town to the fort. We were all a bit wobbly legged after that so we recovered with a cafe lunch in the medieval square.

After our stay in the mountains it was time to hit the coast and the trendy French resort town of Collioure. 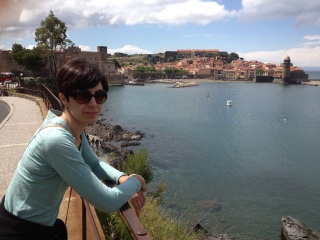 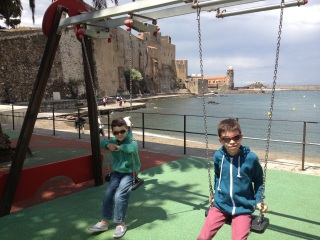 This town was popular with the fauvist painters and there is an art trail that you can follow. It was ridiculously picturesque and full of little bays and coves to expore. 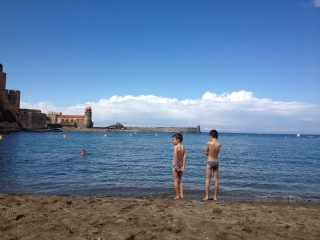 And that was our whirlwind tour of French catalonia.  Now it was time to head south back into Spain.